Greetings from Crater of Diamonds State Park! 2020 was a great year for diamond finds at the Crater. Despite the many changes brought on by COVID-19, more than 129,000 people visited the park in search of diamonds. The following is a recap of diamond finds for 2020, including some of the most memorable discoveries.

Visitors found 71 diamonds during the first three months of 2020 until the diamond search area closed from March 21 to May 22, due to a growing number of COVID-19 cases. After the search area reopened, visitors registered nearly two diamonds per day through the rest of the spring season.

The first day of summer also brought the year’s first two-carat-plus diamond. Beatrice Watkins, of Mena, Ark., found a 2.23-carat dark brown diamond on June 20 while dry sifting on the upstream side of a culvert. It was about the size of an English pea, with an oblong shape and a metallic gleam. She named it after herself, calling it the Lady Beatrice. It was the year’s fifth-largest find. 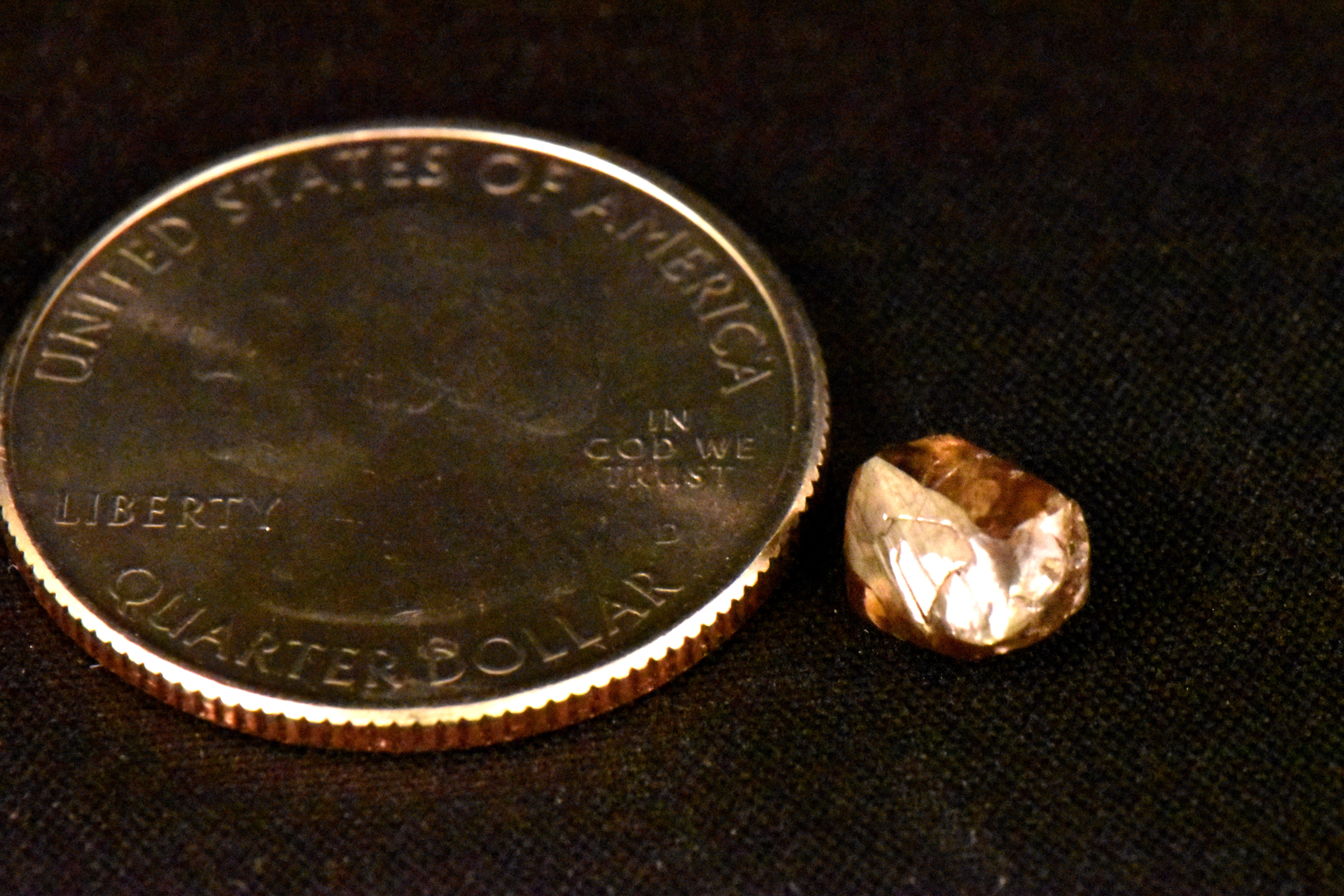 Less than three weeks later, another visitor found a large diamond while wet sifting. William Dempsey, of Athens, Ala., was sifting dirt from the East Drain of the search area on July 9 when he found a 2.73-carat white diamond, the year’s fourth-largest. It was clear white and rounded, with a brilliant shine. Dempsey named his find the Dempsey-Ducharme, for his family’s memorable experience at the park. 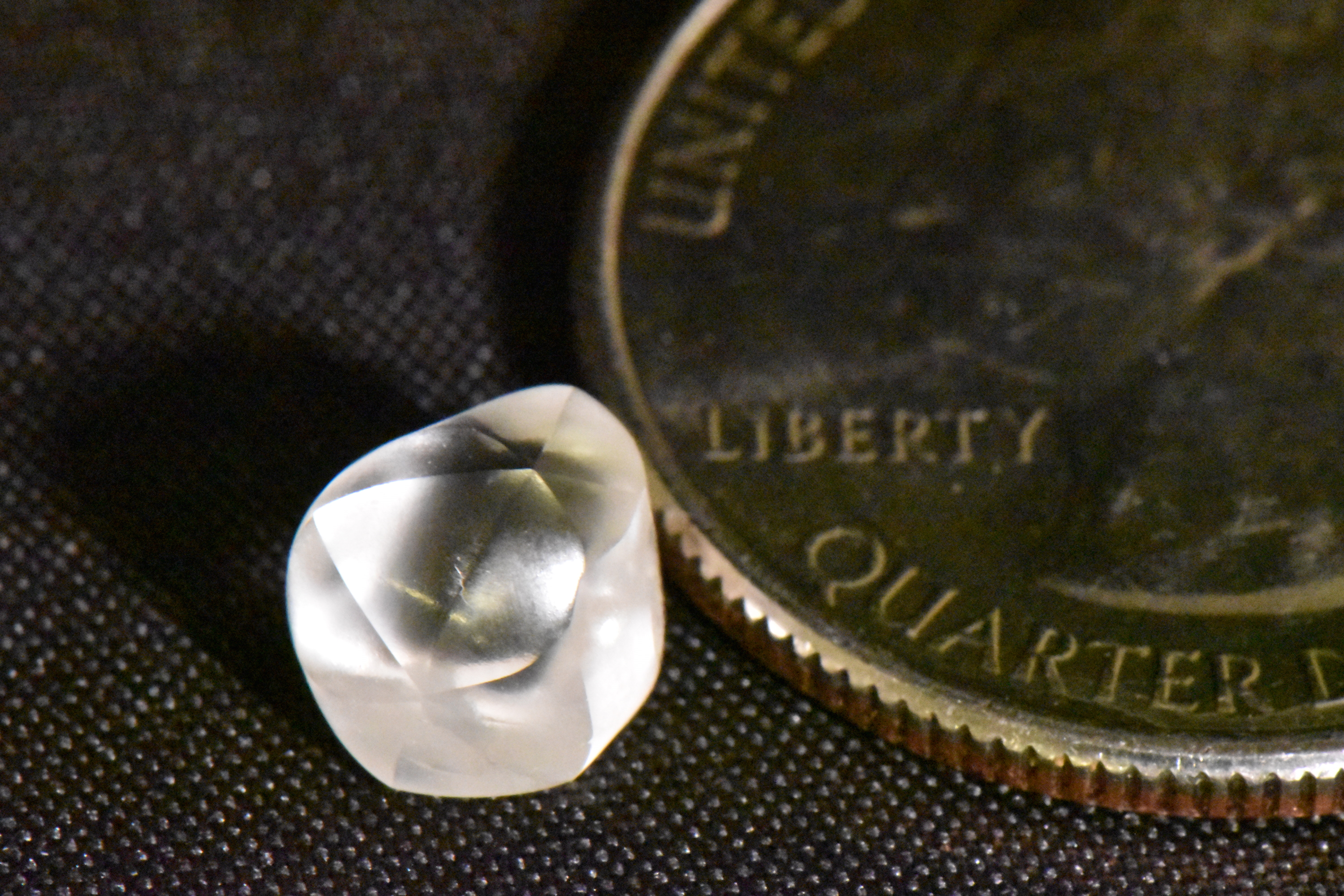 The next day Dr. Mindy Pomtree, of Benton, Ark., registered the year’s second-largest find, a 6.39-carat white diamond. She had found it at the park during an earlier visit and taken it home, unsure of what it was. After a local jeweler confirmed that it was a diamond, Pomtree returned to the Crater of Diamonds to register her gem. It was about the size of a pumpkin seed, with a rectangular shape and a glittering luster. Pomtree named it Serendipity, noting that she was lucky to have found it. 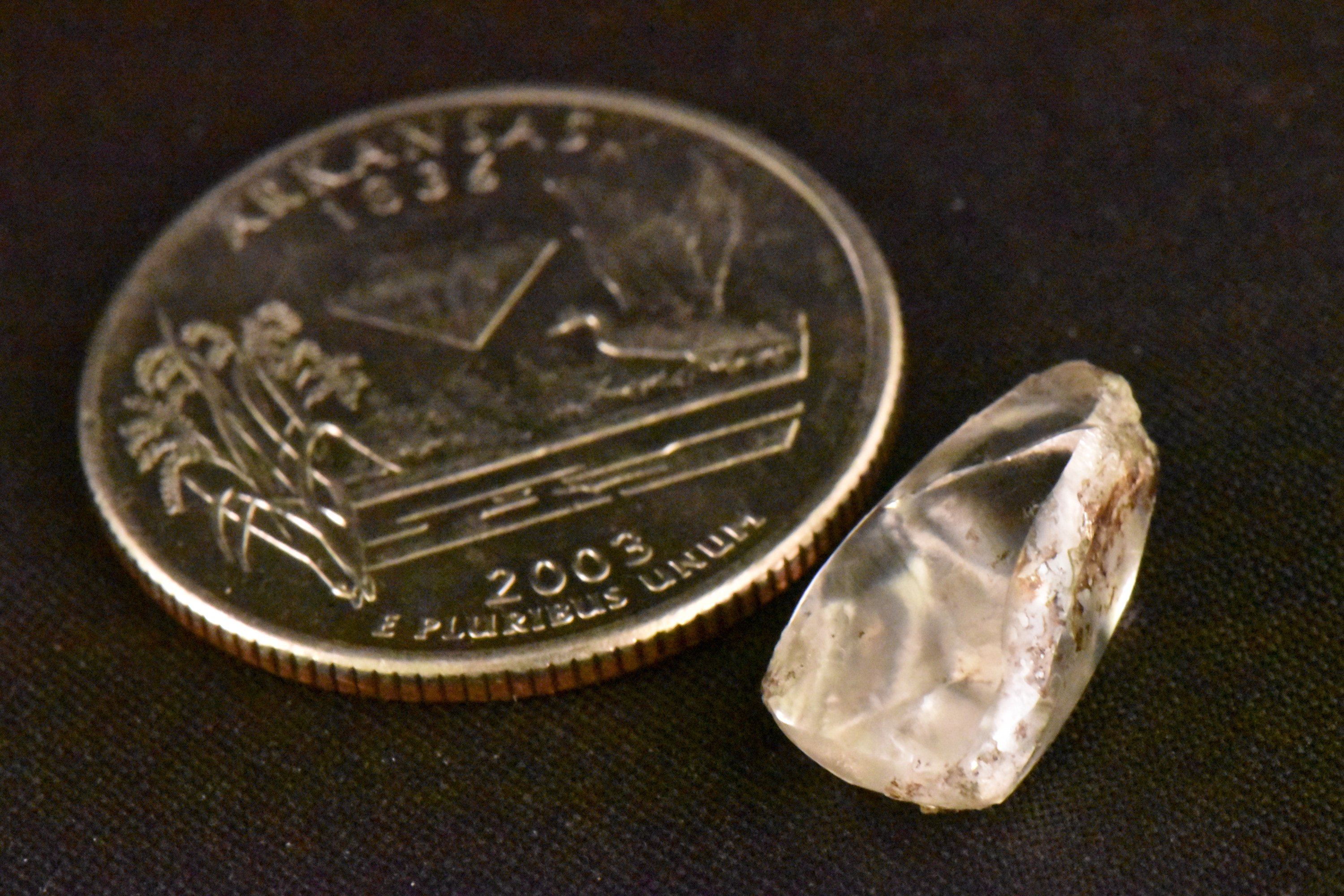 Labor Day 2020 was an historic day for the park, when Kevin Kinard, of Maumelle, Ark., went diamond mining with his friends. Kinard was surface searching on the south end of the search area when he picked up a brown, marble-sized gem with a dimpled surface. Upon having his find identified by park staff, Kinard learned that he had discovered a 9.07-carat diamond, the second-largest ever found at the Crater! He chose to name it the Kinard Friendship Diamond, in honor of his friends. 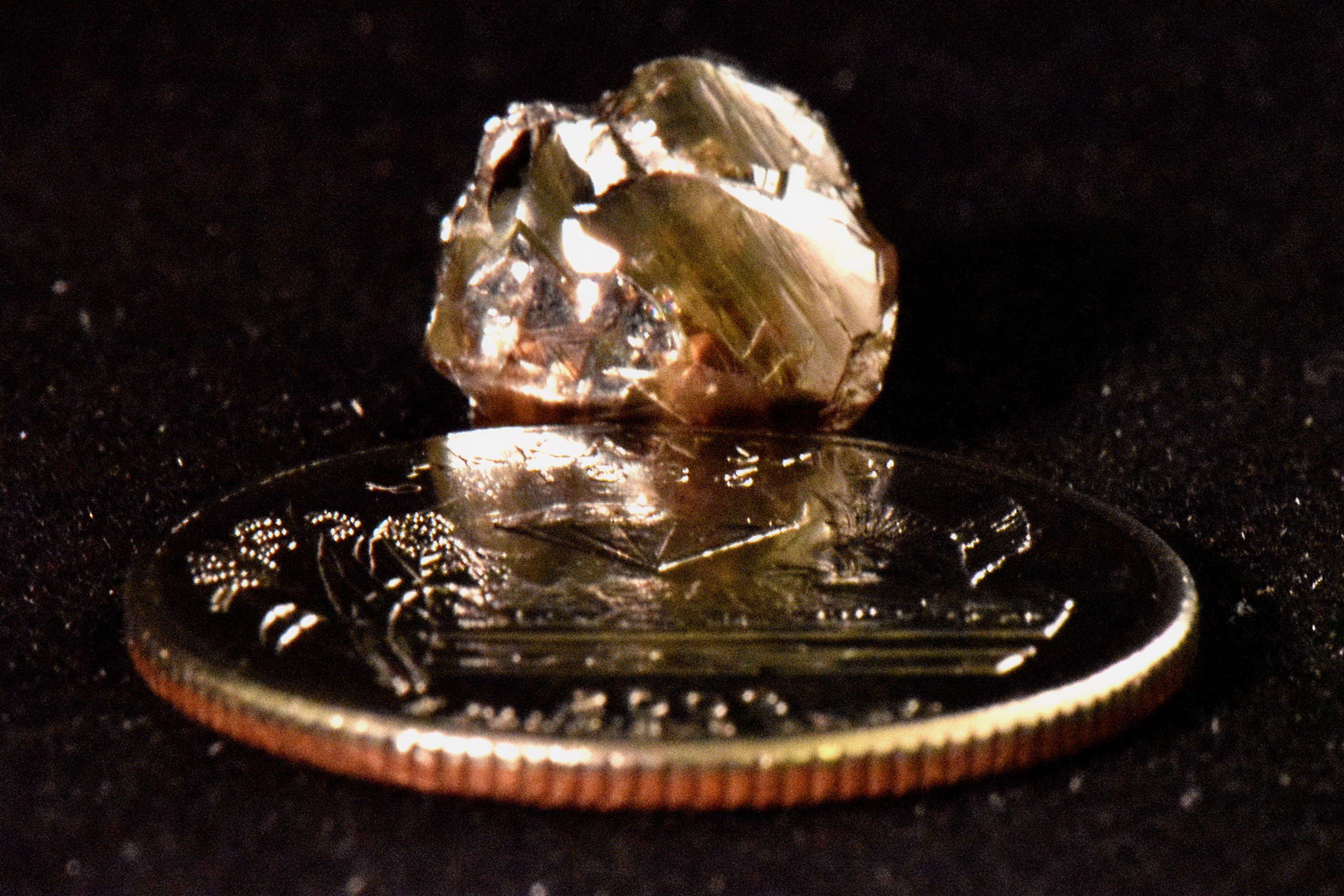 Park guests registered 109 diamonds last summer. As temperatures cooled, finds remained fairly steady at about one per day through the end of the year. On Halloween Steven McCool, of Fayetteville, Ark., found the year’s third-largest diamond. McCool was wet sifting near the end of the day when he found a 4.49-carat yellow gem sparkling in the top of his screen set. It had a beautiful clarity with an oval shape. McCool named his find after his son and daughter’s initials, calling it the BamMam Diamond. 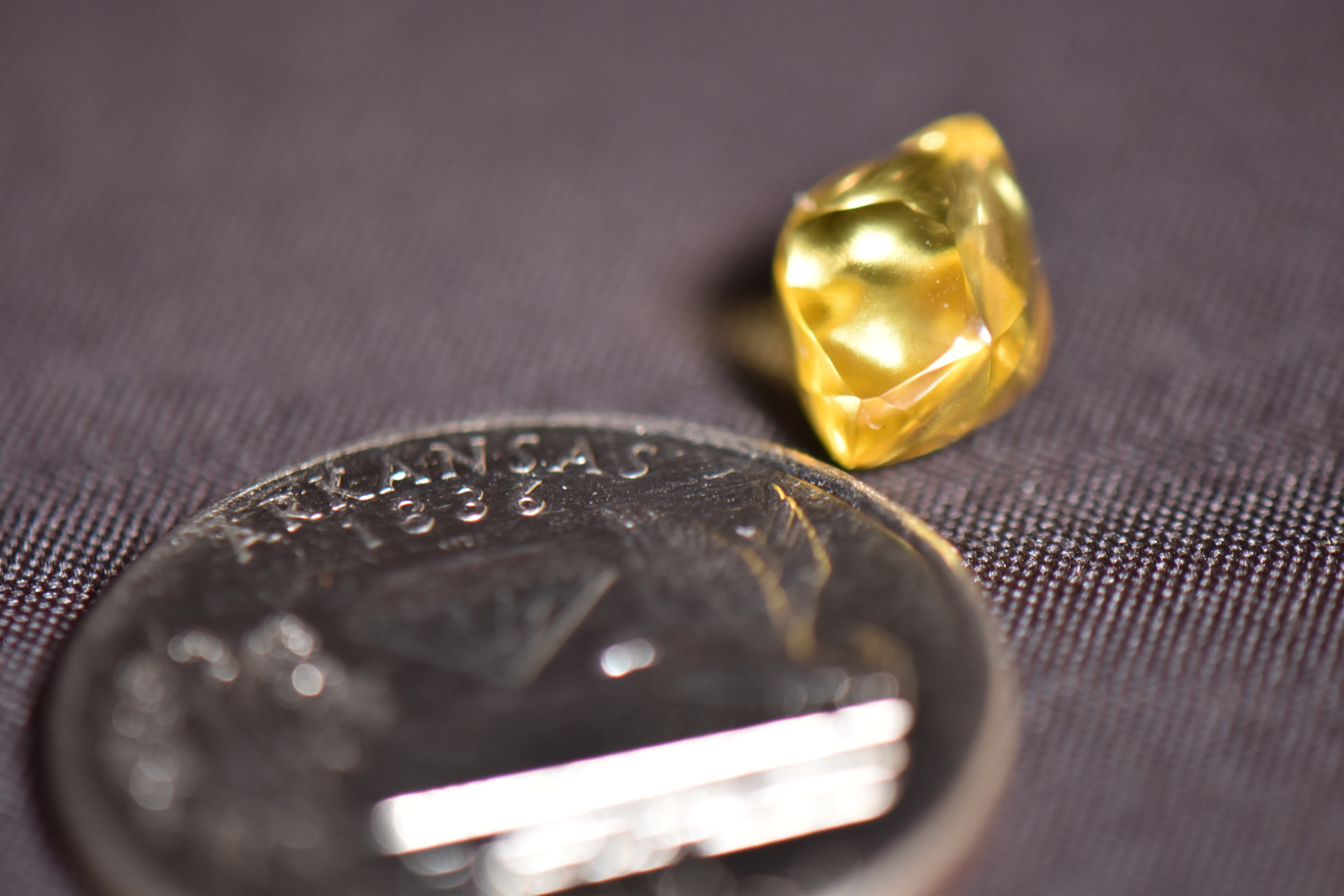 Park guests registered 353 diamonds in 2020, weighing a total of 81.91 carats. Visitors from Arkansas registered 112 diamonds, while travelers from 25 other states registered 241 gems.

Of the diamonds found, 269 diamonds were white, 43 were brown, and 41 were yellow. The average diamond weight found last year was just under one-quarter carat, but 17 diamonds weighed more than one carat each. Visitors found 26 diamonds on top of the ground.

While the staff at Crater of Diamonds State Park enjoys reminiscing about these beautiful and historic diamond finds, we are looking forward to the many new and exciting discoveries that await us in 2021! What is a Diamond Worth?