It was all treat, no trick this Halloween for Steven McCool of Fayetteville, Ark., at Crater of Diamonds State Park. The 34-year-old found the third-largest diamond of the year.

“Arkansas is the only state in the country that has a diamond mine open to the public,” said Department of Parks, Heritage and Tourism Secretary Stacy Hurst. “While many diamonds are found every year, it never ceases to be exciting! I hope Mr. McCool’s story inspires even more people to visit Crater of Diamonds State Park.”

McCool said he was planning on going back to Fayetteville, but extended his stay since there had been a good rain and conditions were optimal to find a diamond. That turned out to be a good decision.

He was wet sifting, or sifting dirt using screens and water, his 11th bucket of the day. His hands were soaked through his gloves and the water was ice cold. Time was ticking down, and the park was closing in about 30 minutes.

“As my eyes were panning to it, I was thinking it could be an amber piece of glass like an old Coke bottle,” McCool said. “Once I focused on it though, I knew it was a diamond. I was like ‘No way! No way!’”

Even though he is a self-proclaimed “newbie” at diamond hunting, McCool knew this was a diamond. He put his treasure in a safe place and continued wet sifting the rest of the dirt he collected in the Canary Hill area of the park so he could go through it at home since the park was about to close. Visitors are allowed to take up to five gallons per person/per day of sifted gravel home to look through at their leisure. 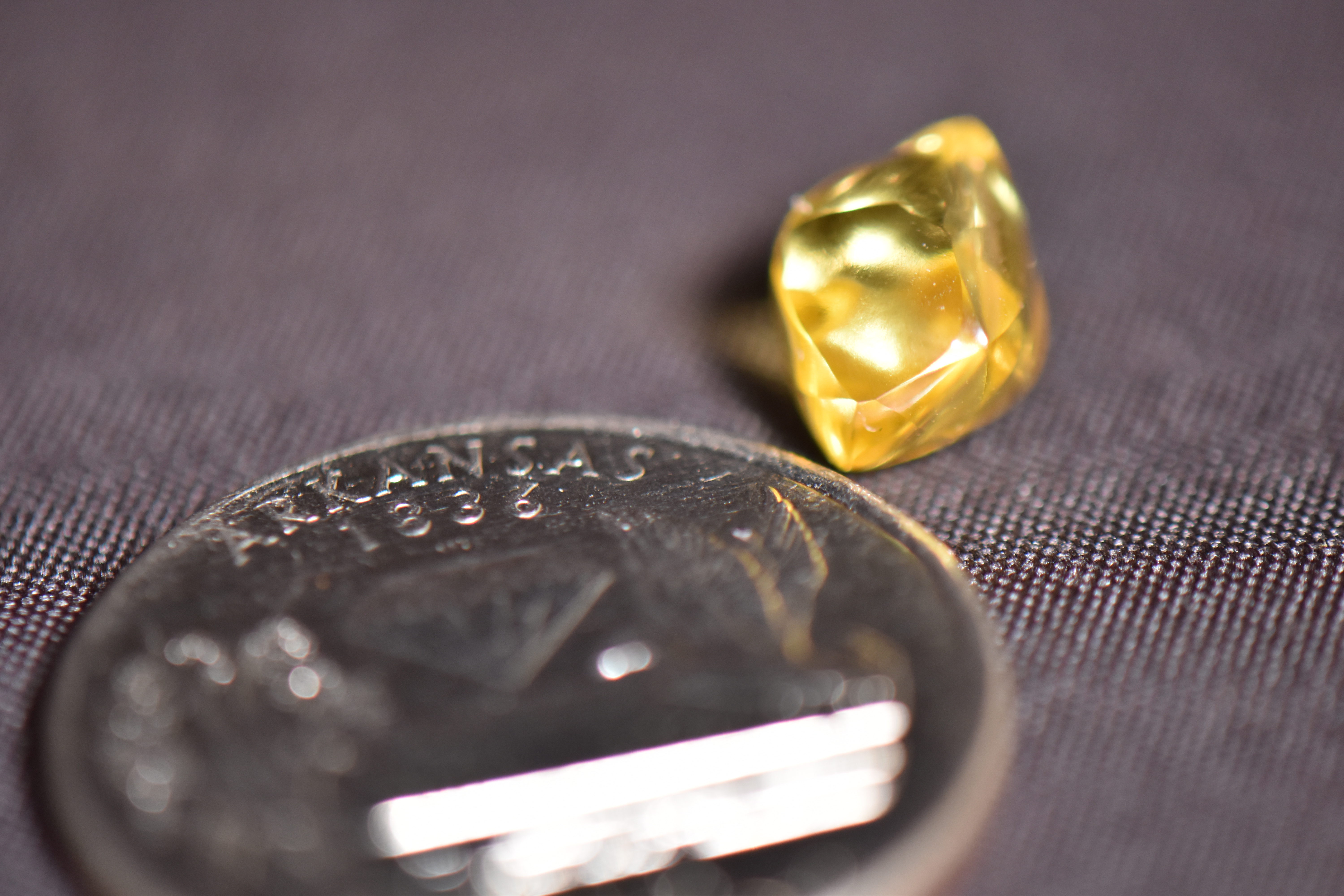 ​​This was his fifth trip to the Crater and typically he would take all of his finds to the identification table to find out what treasures he found. This time, he said, “I went up there and was like ‘Where do I register my diamond?’”

He was right. “Mr. McCool’s find is a 4.49-carat sparkling, canary yellow diamond that is about the size of a jellybean and seems to have great clarity. It is a stunning diamond,” Crater of Diamonds State Park Assistant Superintendent Meghan Moore said.

She also said that finding a diamond that large wet sifting is unusual. “It is extraordinarily rare to catch a diamond in the top screen of a screen set. The mesh size of the top screen is larger and typically used to catch and remove bigger pieces of gravel – not diamonds. The average diamond size found wet sifting a quarter of a carat. Typically, larger diamonds are found by surface searching.”

“I put the diamond on the ground just to see if I would have noticed it,” McCool said. “It was very large, proud, and shiny. There were others looking in that area, so if it would have been just a little closer to the surface, someone could have easily found it.”

On Labor Day of this year, Kevin Kinard of Maumelle, Ark., found a 9-carat diamond, the second-largest diamond found in the park’s history by surface searching.

“What’s more precious than a precious gem? My children. So, I named it after my children and the name will stay with the diamond forever,” he explained. “I called my son afterward and asked him if he remembered what Thanos’s Mind Stone looked like and told him I found one!”

He says he is not sure yet if he will sell or keep the diamond.

“I’m torn. I’m somewhat sentimental. It’s my first diamond I found. I am the first person to unearth this, the first person to touch it. It’s hard to wrap my head around it. I am blown away by the clarity, the beauty, how rare it is. I’m definitely blessed, not lucky. It was the Lord’s work,” he said.

“Mr. McCool hit the nail on the head. This is part of what makes Crater of Diamonds State Park such a special place. Not only is it the only place in the world where you can search for finders keepers diamonds, no one else has made your discovery before you. Each diamond is unique, as is each discovery,” Arkansas State Parks Director Grady Spann said. 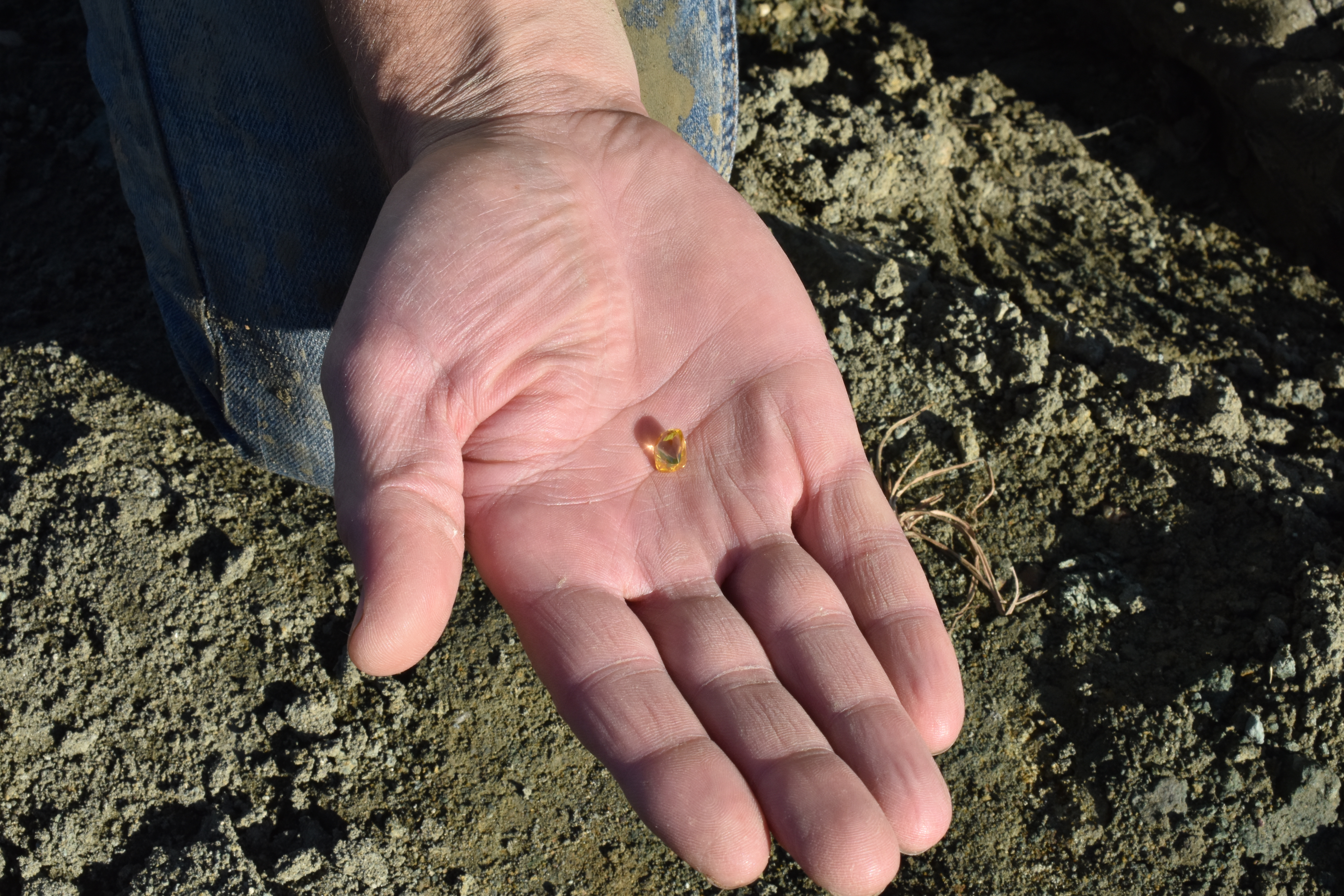 McCool said he can’t wait to come back to the state park for another diamond hunting adventure.

“I’ve set the bar really high and it will be really difficult to top this one. The hunt and the excitement that comes with this is it for me. You never know what you’re going to get,” he said. “It’s a lot of work but if you work hard and persevere, the reward is even greater if you find something. You’re just blown away.”

Admission to the park’s diamond search area is currently limited to 1,500 tickets per day due to COVID-19 restrictions. Visitors are encouraged to purchase tickets in advance at www.CraterofDiamondsStatePark.com, to ensure access.