Two pelicans and a cormorant swim in the water in the foreground with other out-of-focus birds in the background.

In this photo essay, join us for a virtual winter walk along the shores of the lake to discover a few of the birds found on Lake Dardanelle during the winter. 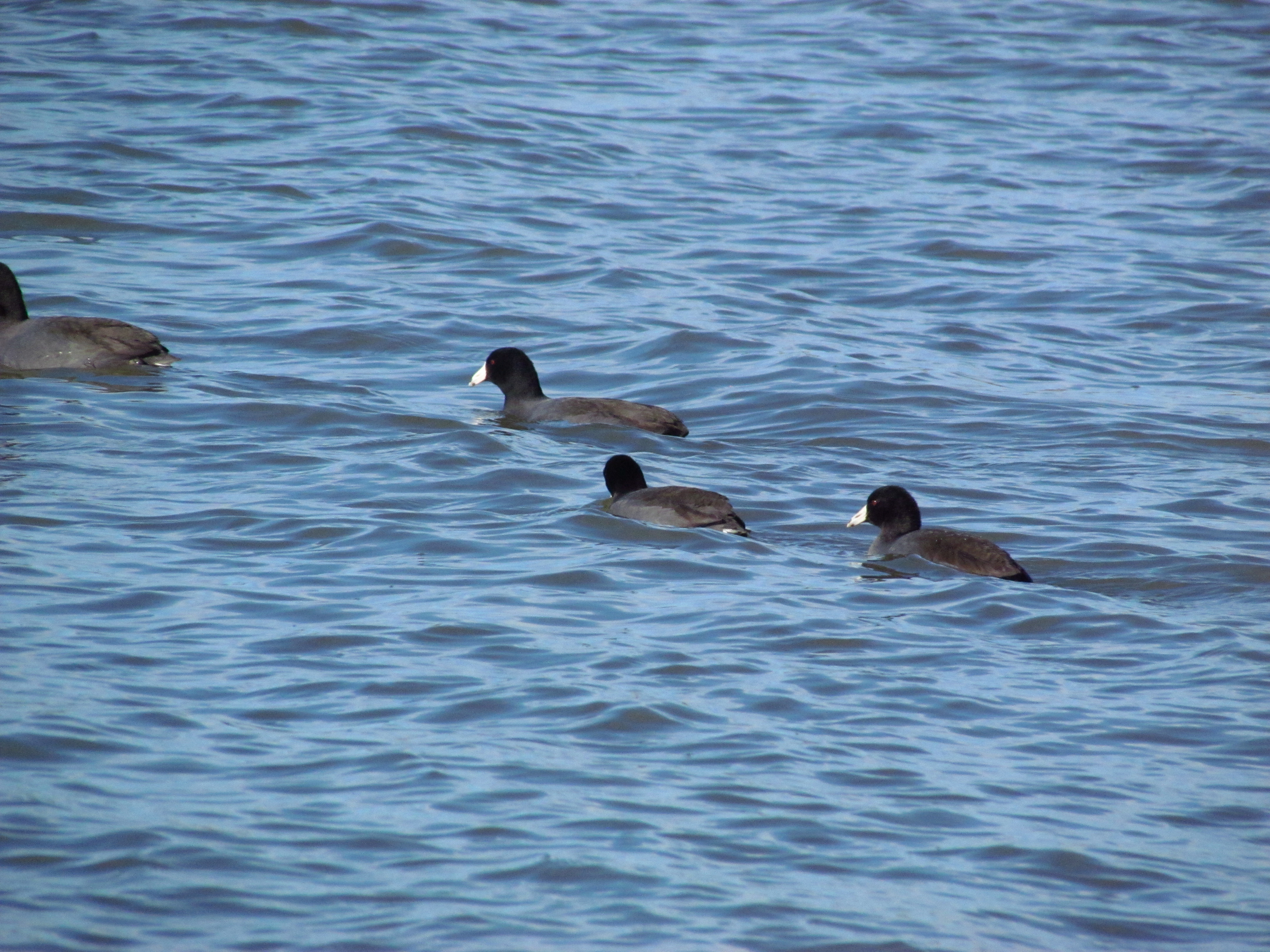 The American coot can be seen almost daily during the winter months at Lake Dardanelle. The American coot is often mistaken for a type of duck because they spend so much time on the water but does not have the webbed feet seen on ducks. Watch as coots dabble for aquatic plants to eat near the shorelines. Their white bills shine on their dark bodies. 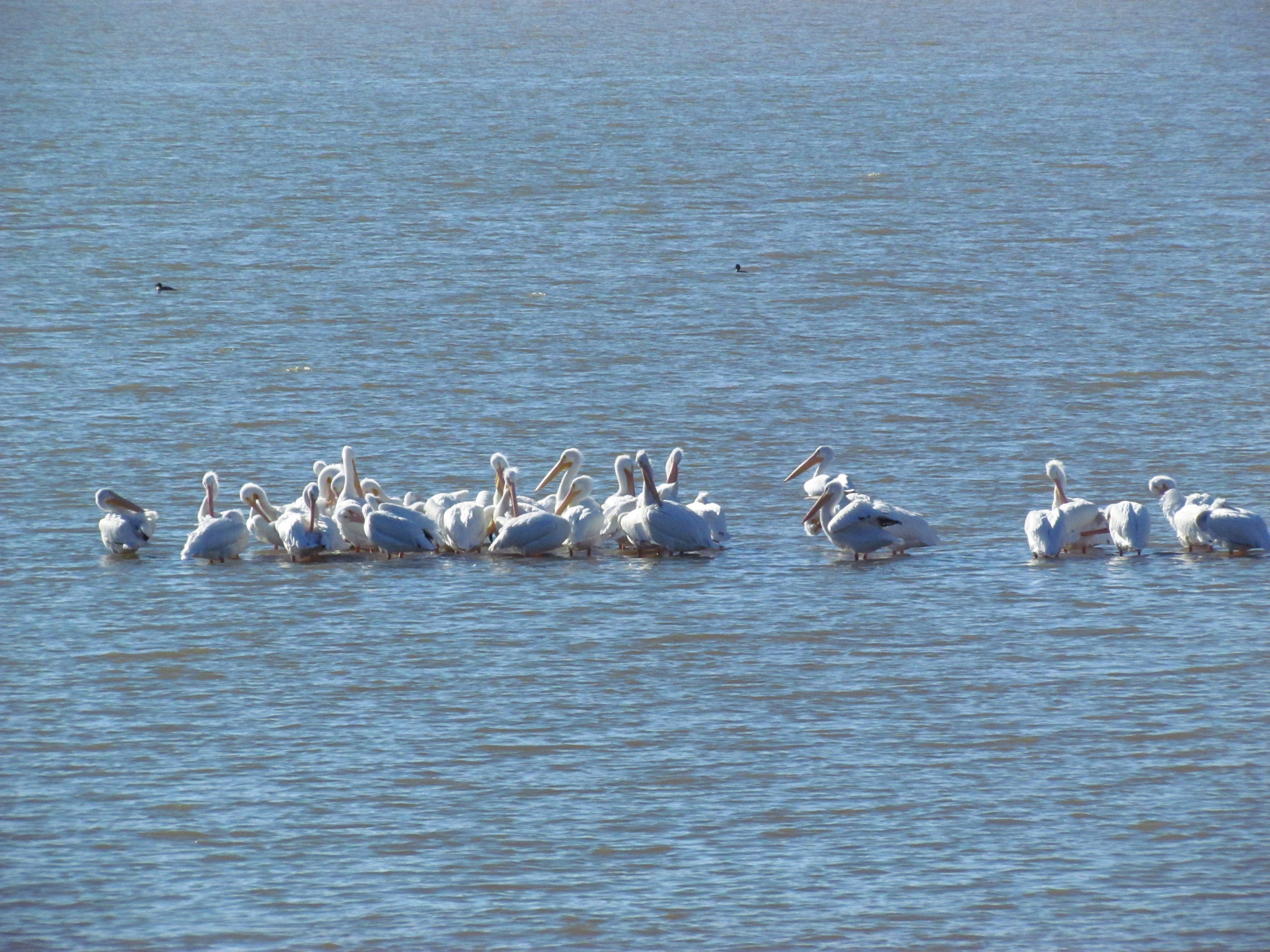 American white pelicans are also often seen from the shores of Lake Dardanelle State Park as they swim in the water or group up on the mudflat near the visitor center. Despite their large size, pelicans are graceful fliers and powerful swimmers. Keep an eye out for pelicans as they scoop up fish in the large pouches on their beaks. 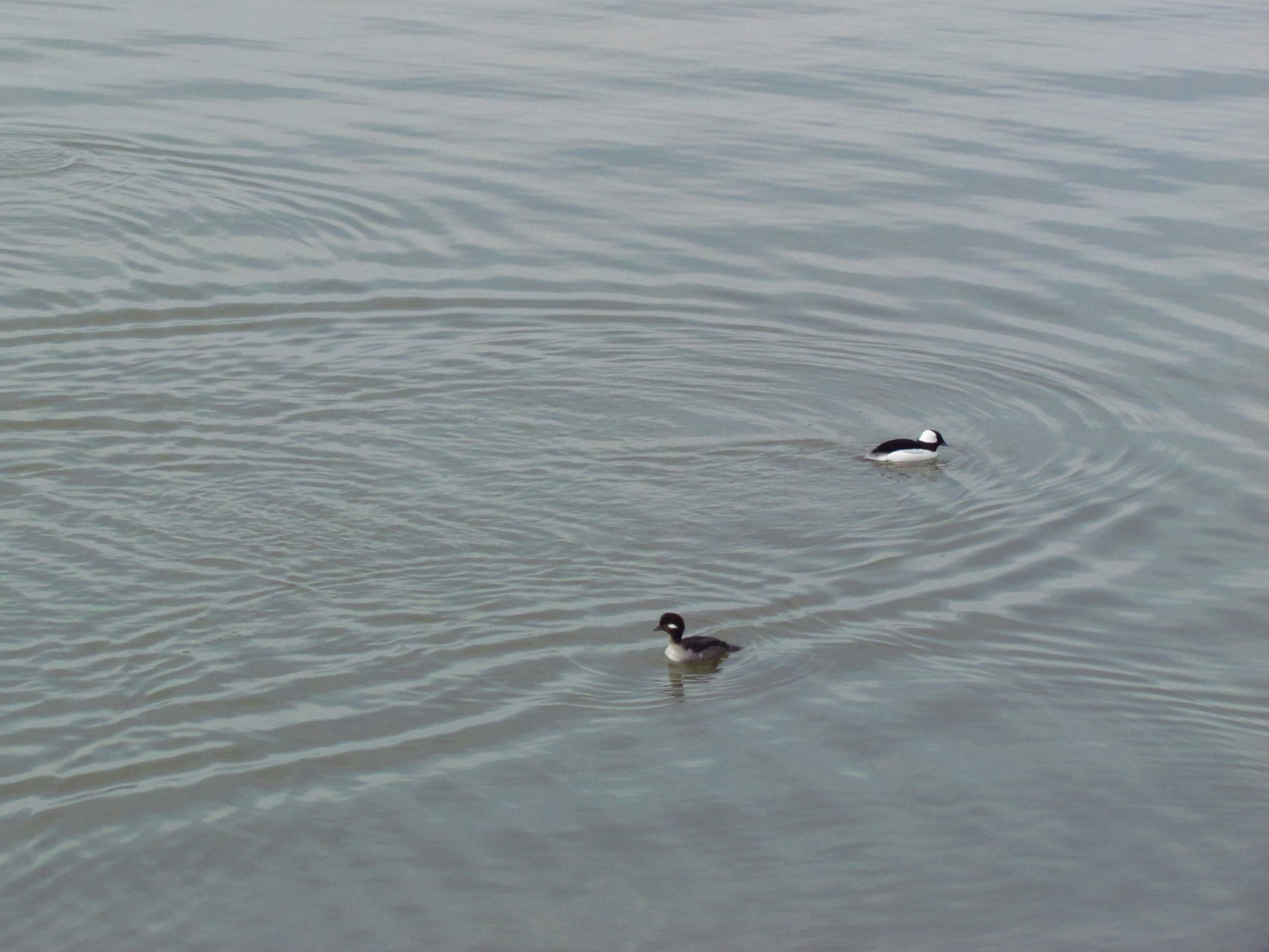 Buffleheads are frequent visitors to Lake Dardanelle during the winter as well. Males have a bright white patch on their head and sides, whereas females are brown with a much smaller white spot on their cheek. Watch as buffleheads dive to catch invertebrates in the waters of Lake Dardanelle. When a bufflehead takes flight from the lake, you will see it run a few steps across the top of the water before taking off. 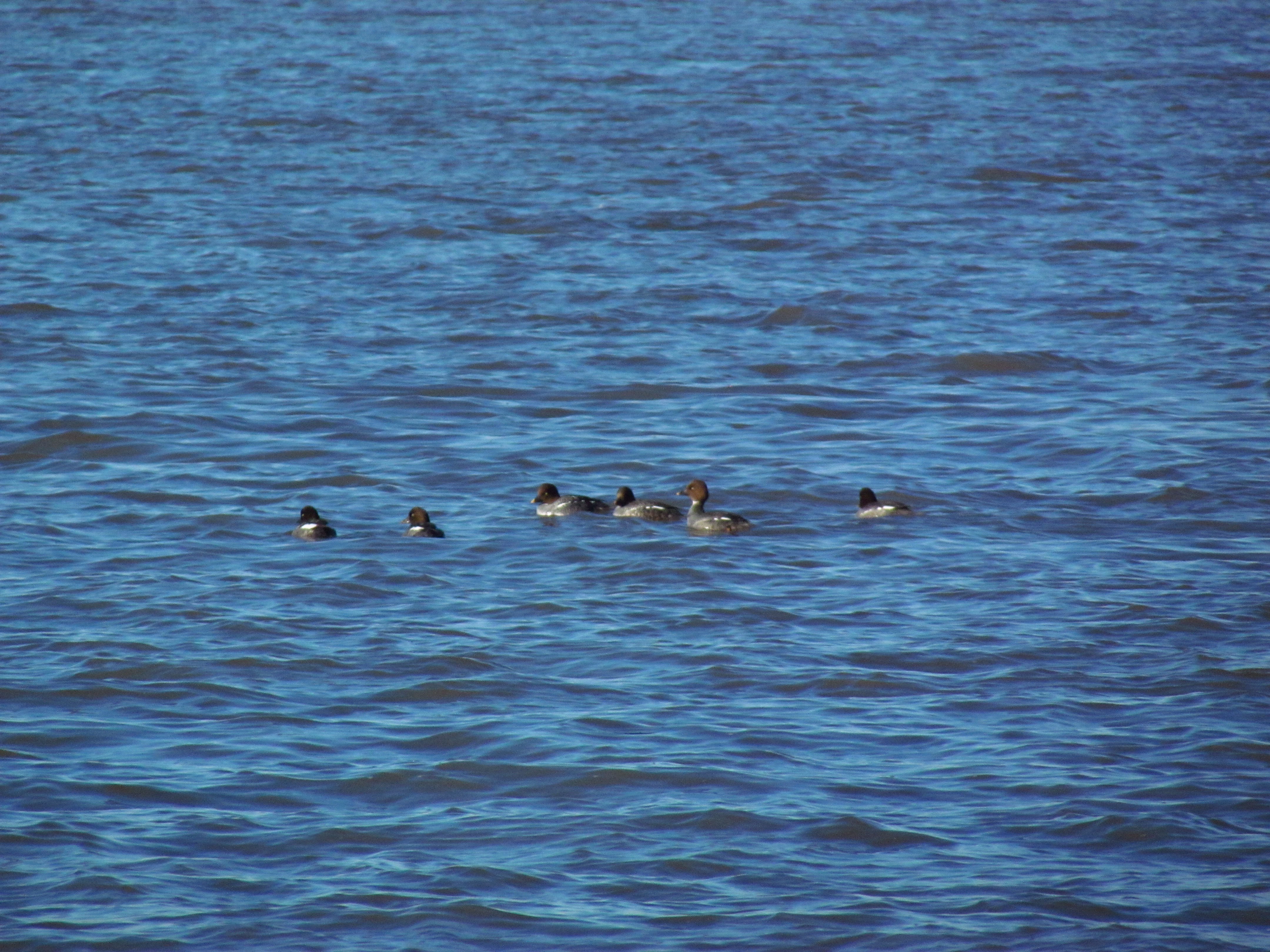 Common goldeneyes can also be watched from the shores of Lake Dardanelle. While males have more distinct, sharp black and white markings on their bodies and a bright white spot behind their bills, the female goldeneyes are more subdued in color. Seen here, a female goldeneye has a grayish body with a brown head, but both the males and females have a golden-colored eye that gives them their name. Keep an eye out for these birds as they quickly fly past or swim and dive for food. 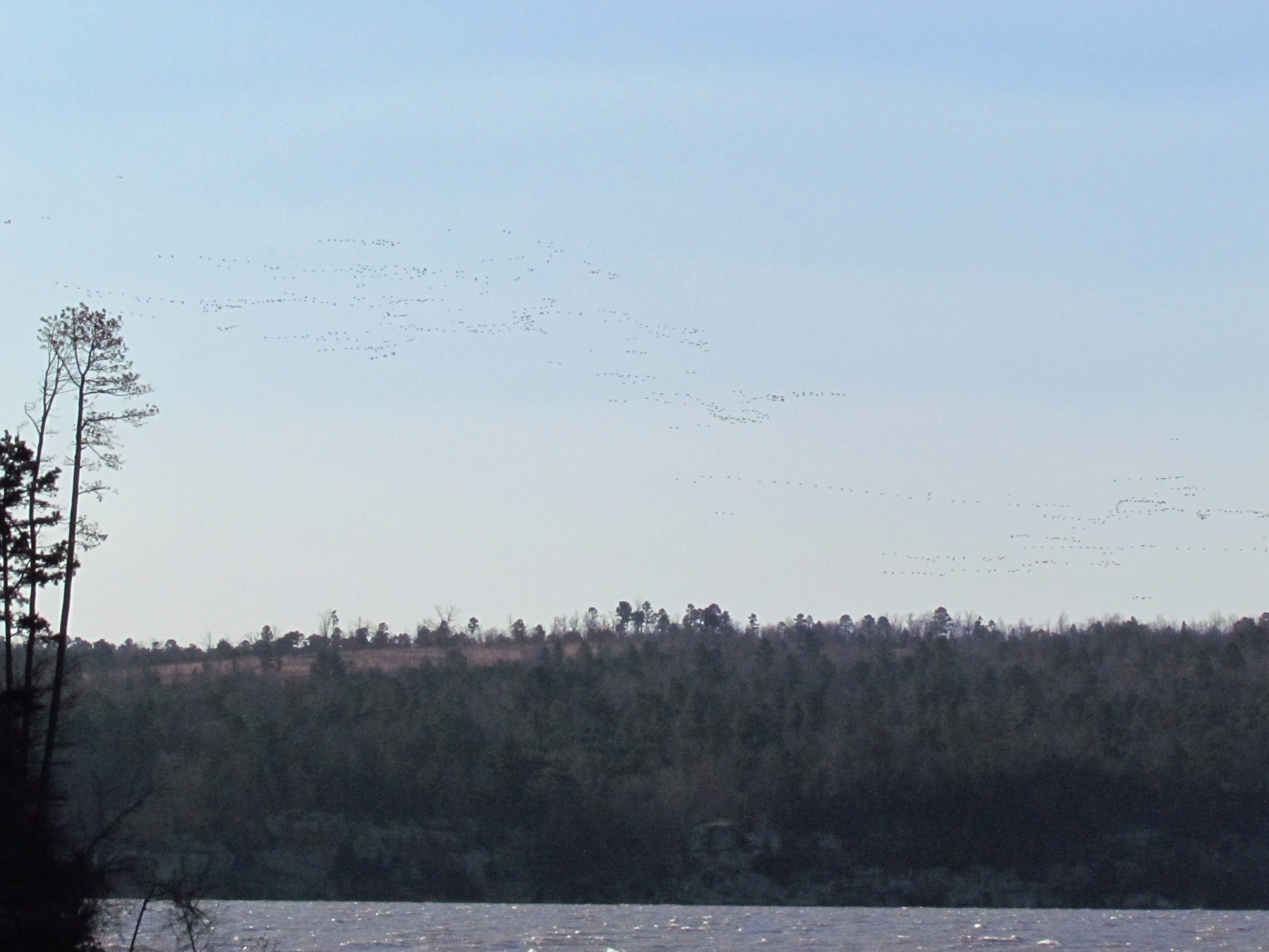 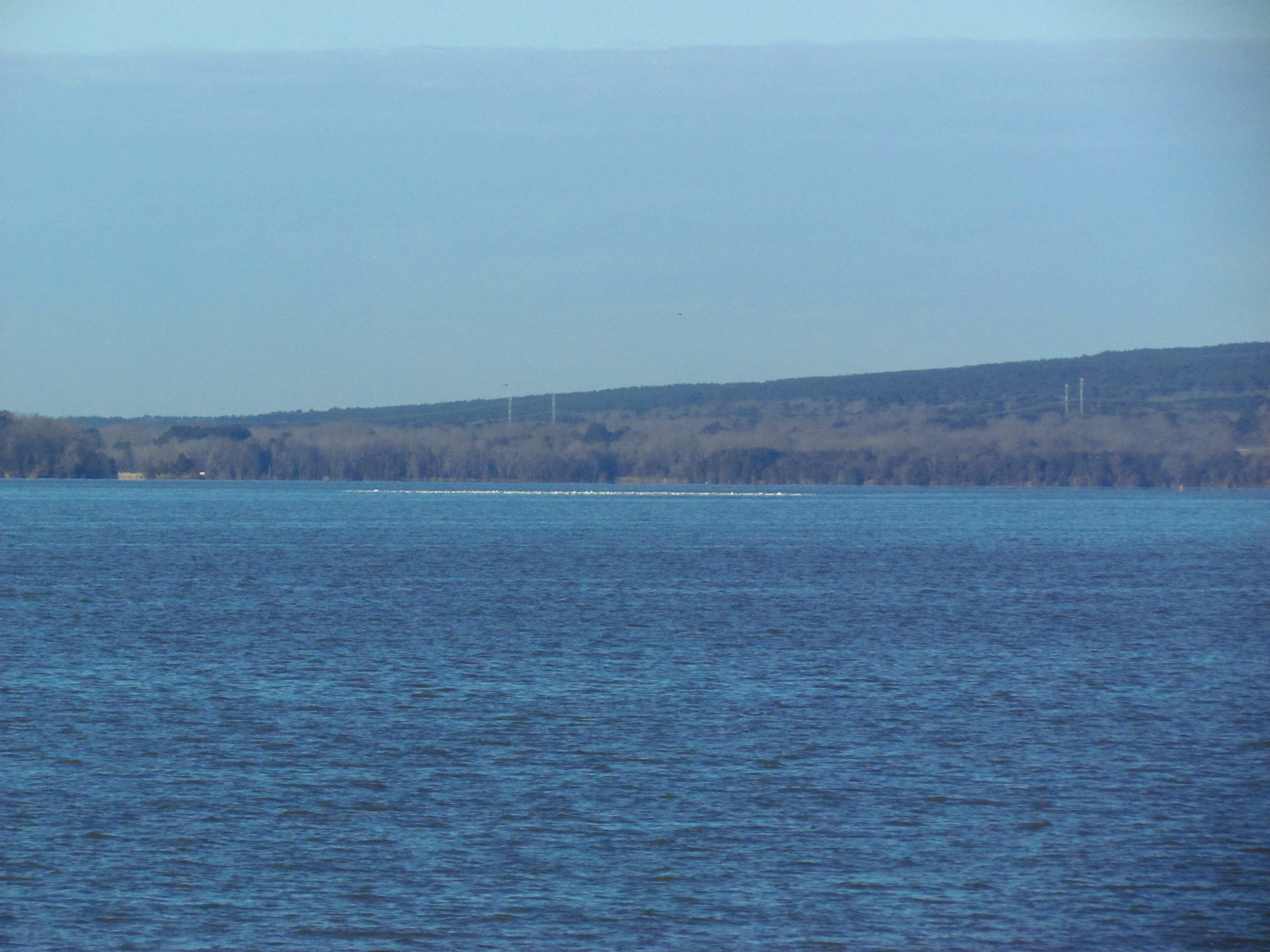 Snow geese frequent Lake Dardanelle each winter. Most mornings, they can be seen flying upstream by the thousands, to float on the lake during the day. They return to roost in the fields surrounding the river downstream from the park late in the afternoons where they forage for vegetation. Watch and listen for the large flocks in flight or look for a shimmer of bright white along the surface of the lake in the distance. On clear days, they can also be seen floating in the middle of the lake from atop nearby Mount Nebo State Park in Dardanelle! 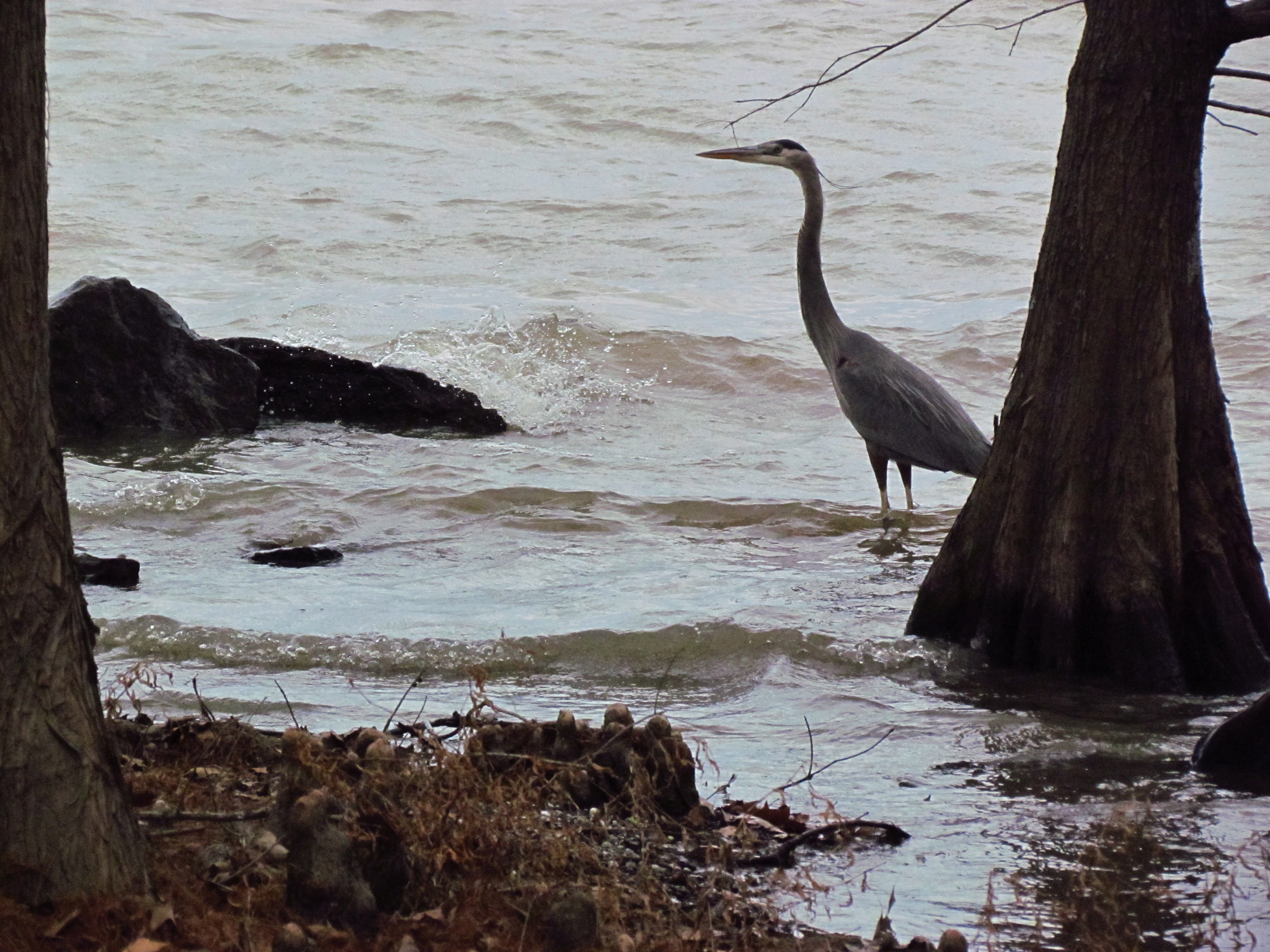 Commonly seen throughout the year, a walk along the shores of Lake Dardanelle State Park is likely to result in seeing a great blue heron. These large birds have long legs which they use to stealthily stalk their prey. While they will eat almost anything they can get ahold of and fit down their throats, great blue herons frequently take advantage of the healthy fishery found in Lake Dardanelle. 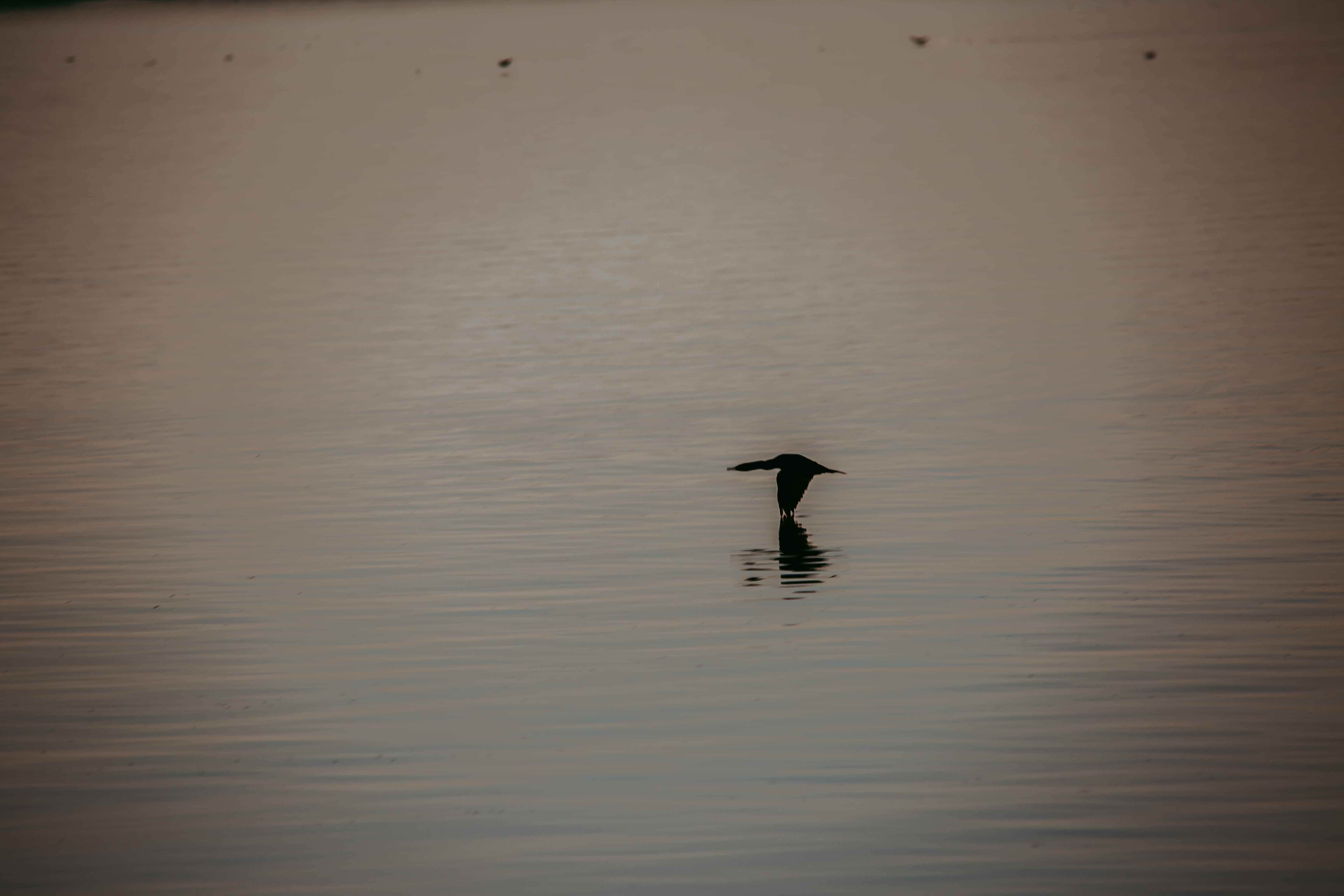 Double-crested cormorants can be seen flying low over the water of Lake Dardanelle as they go to and from their roost on the bluff lines to the south of the state park. Cormorants are larger than many of the waterbirds seen during the winter, have dark bodies, and fly with a crook in their neck. They are skilled divers as they hunt for fish to eat but are more commonly seen in flight from our shorelines. Though they can be seen alone, like the cormorant pictured, it is common to see them in V-shaped flocks as they fly low above the water. (Photo courtesy Isabelle Berryhill) 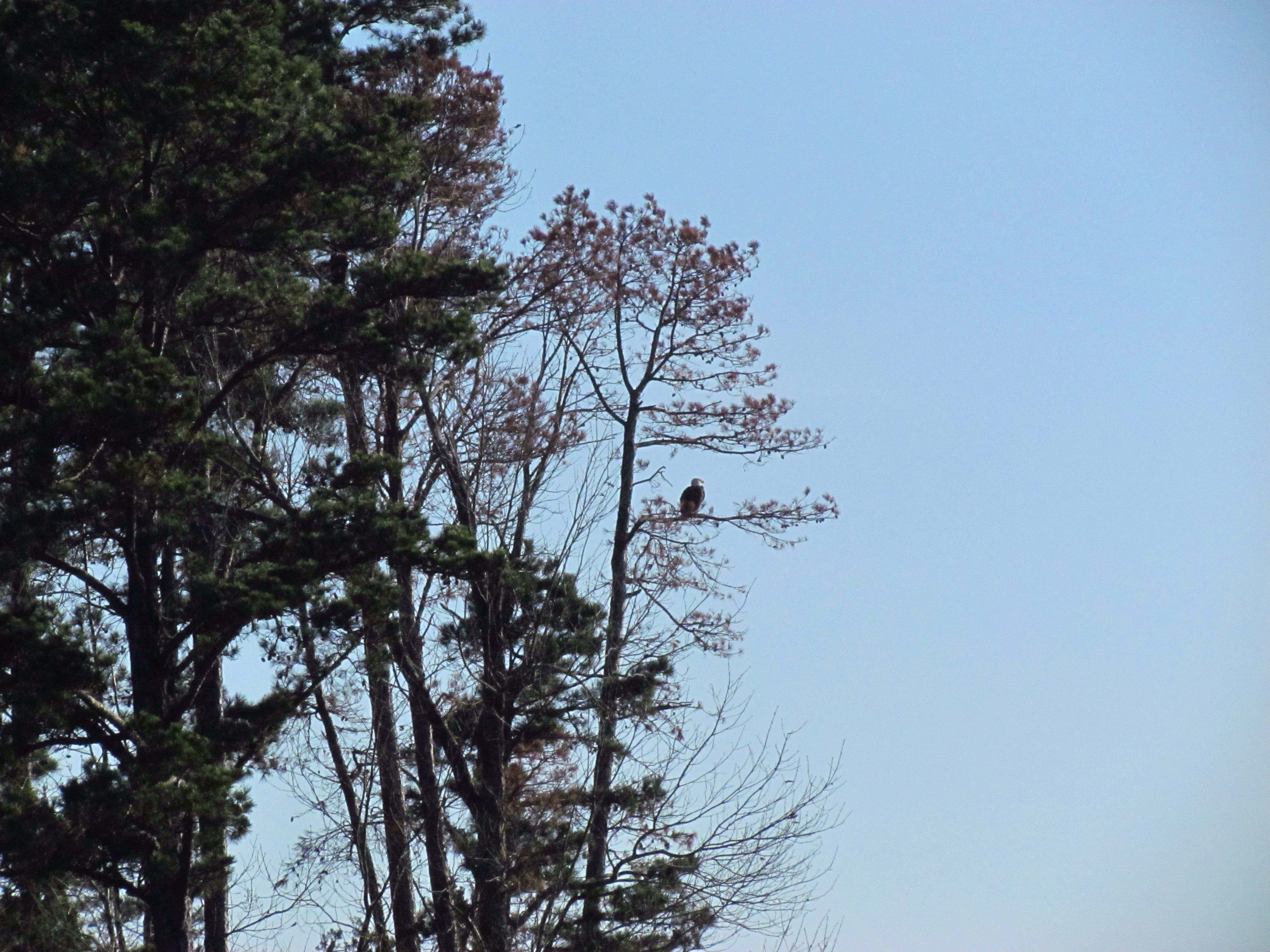 Seeing a bald eagle with your own eyes is an exhilarating experience for many. Lake Dardanelle is home to several residential pairs of eagles that nest on the lake, and additional birds migrate here for the winter. Most of our eagle sightings occur when the bird is in flight or perching in a tree, as the one pictured here. The bright white head and tail feathers are a telltale sign you’ve spotted a mature eagle at least five years old, although they may be difficult to see if the bird is silhouetted in sunlight. Immature, or juvenile, eagles do not yet have the distinctive white feathers. You can also listen for eagles as they chatter, but remember that they don’t actually sound like what the movies often incorrectly portray!

Lake Dardanelle State Park provides an easy spot for people of all experience levels to enjoy birdwatching. During the winter, there are a multitude of species taking advantage of the healthy ecosystem found here. While binoculars can give you a more detailed view of the birds, they are not required, and many can be seen well with the naked eye.

Take some time to go outside today, whether it be in the yard at home or at your nearest park, and see what birds you can find. When you are done, visit our park webpage to plan your next trip to come see us and go birding from the shores of Lake Dardanelle State Park for yourself! Megan Ayres Moore is a Park Interpreter at Lake Dardanelle State Park. Some of her favorite pastimes include being outdoors, cheering on her favorite sports teams, playing trivia, and doing puzzles with her friends and family.