At Crater of Diamonds State Park, in Murfreesboro, Arkansas, visitors can search for real diamonds in a volcanic pipe. The volcanic rocks you can see and find here tell a complex and fascinating story.

More than three billion years ago, diamonds formed 60 to 100 miles underground. About 100 million years ago, molten material called lamproite carried them to the surface through the Prairie Creek Diatreme. A diatreme is a type of volcanic pipe formed by a gaseous explosion. This volcanic pipe was active for tens of thousands of years, but not all eruptions yielded diamonds.

By knowing about different types of lamproite here and where they are found, park staff can help you understand where to search for diamonds while preserving other unique geological features for everyone to view and enjoy. 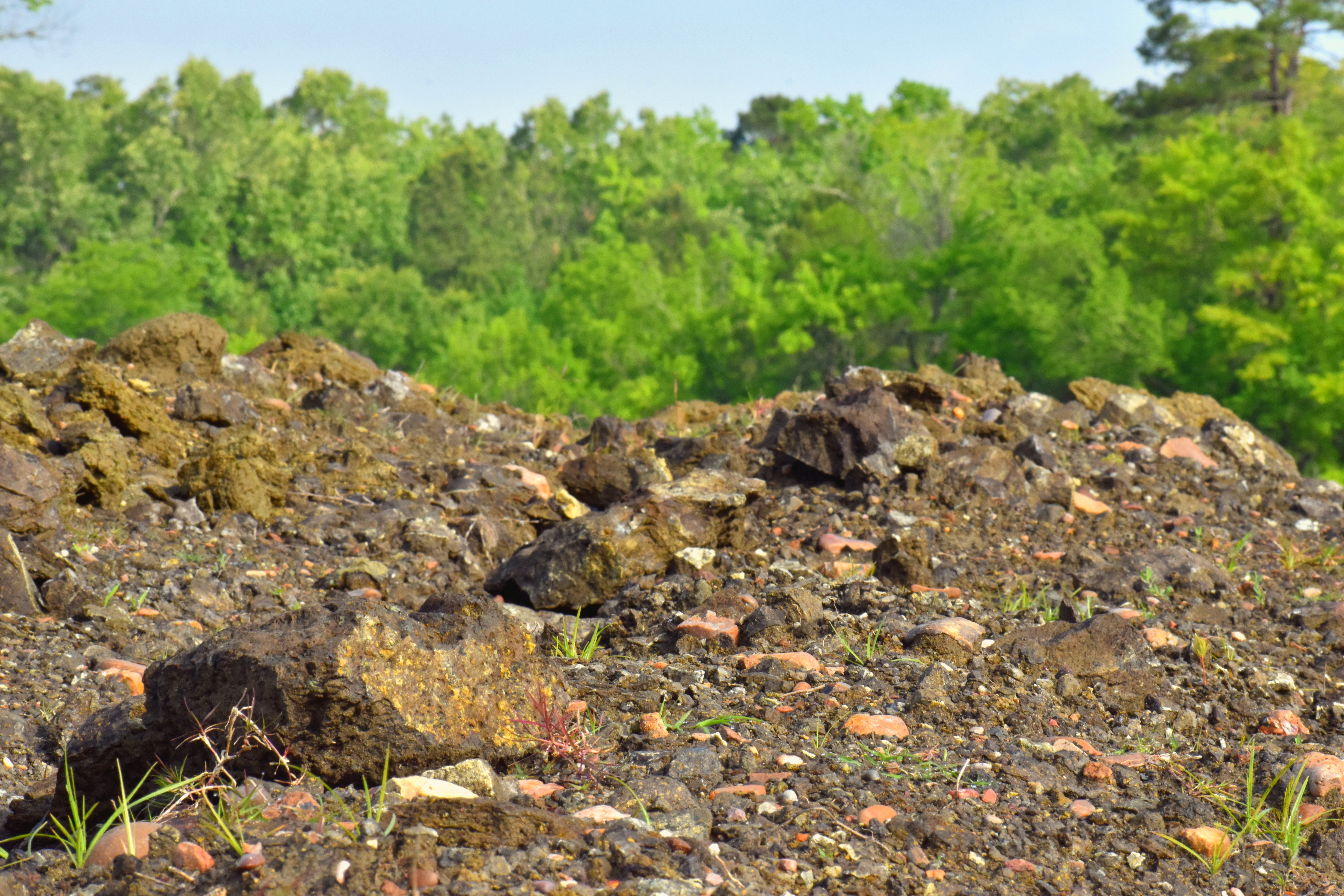 The story of the Prairie Creek Diatreme opens with a quick, violent chapter. During the first eruption from this pipe, molten lamproite shot rapidly through Earth’s mantle and crust. When the gas-filled material reached about 800 feet underground, it exploded the surface like a gigantic bubble bursting, creating an 81-acre, funnel-shaped crater that filled with lava.

Today, park visitors search for diamonds in a 37.5-acre plowed field on the southeastern half of the crater. Most material in this area originated from the first eruption. Because it cooled fairly quickly, many of the diamonds within it were preserved.

Lamproite breccia tuff is the lava that emerged from the initial eruption. It usually appears as a small, black or brown rock with yellow or white spots of weathered olivine. Some freshly-broken pieces still contain glassy olivine crystals.

Breccia tuff is very brittle and erodes quickly. It makes up most of the search area, and a majority of diamonds are found in soil eroded from this rock.

The story continues in the air, as ash and dust from the first eruption settle back into the crater.

Lamproite lapilli tuff formed from airfall material. It has a distinctive green color and varies widely in density. Some pieces are made up of tiny fragments and appear even-grained, while others have large pieces in a fine-grained matrix. All lapilli tuff contains phlogopite mica -- a flaky mineral with a golden metallic luster.

Lapilli tuff can be found throughout the diamond search area but most prominently along the southwestern edge, in a place called Canary Hill. It contains many diamonds, like breccia tuff, but is usually much denser and harder to mine.

The lapilli tuff deposit extends beyond the diamond search area to the western edge of the Prairie Creek Diatreme. Prospector Trail, a 1.2-mile graveled path, traces the northwest half of the volcano and offers views of preserved geological features that are rare for this part of the country. Moss-covered lapilli tuff can be seen along the southwest leg of the trail.

Diamond mining is not allowed along Prospector Trail or anywhere else beyond the designated search area at the park. 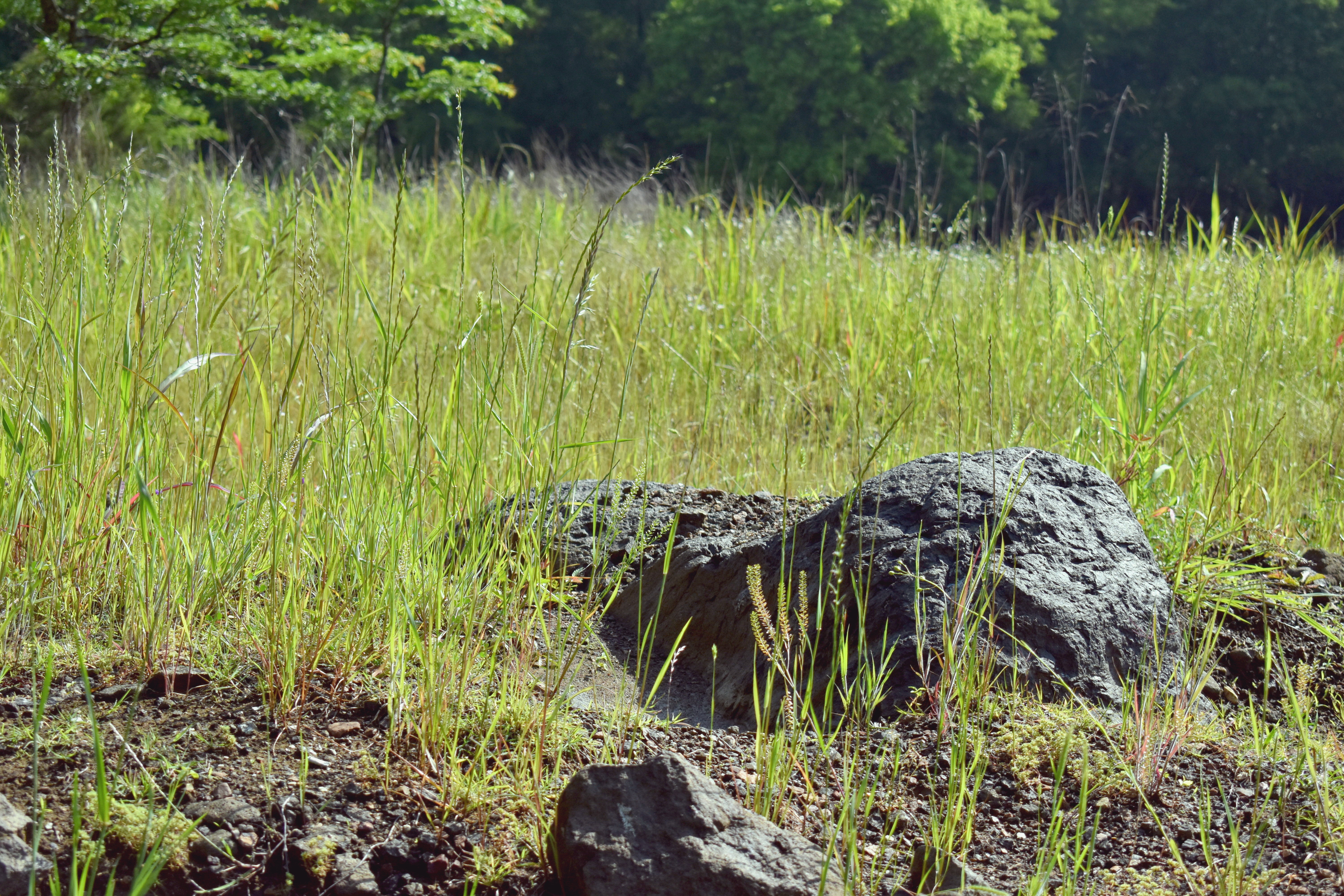 From here the story slows down for several millennia, as a different type of lamproite emerges.

Molten rock from each eruption shifted and covered older volcanic material, creating complex layers over time. Magmatic lamproite filled lakes of lava within the Prairie Creek Diatreme during later eruptions. It looks similar to breccia tuff but is much denser.

As magmatic lamproite erodes, it develops a characteristic rounded surface. It erupted slower than breccia tuff, vaporizing most of the diamonds it contained. 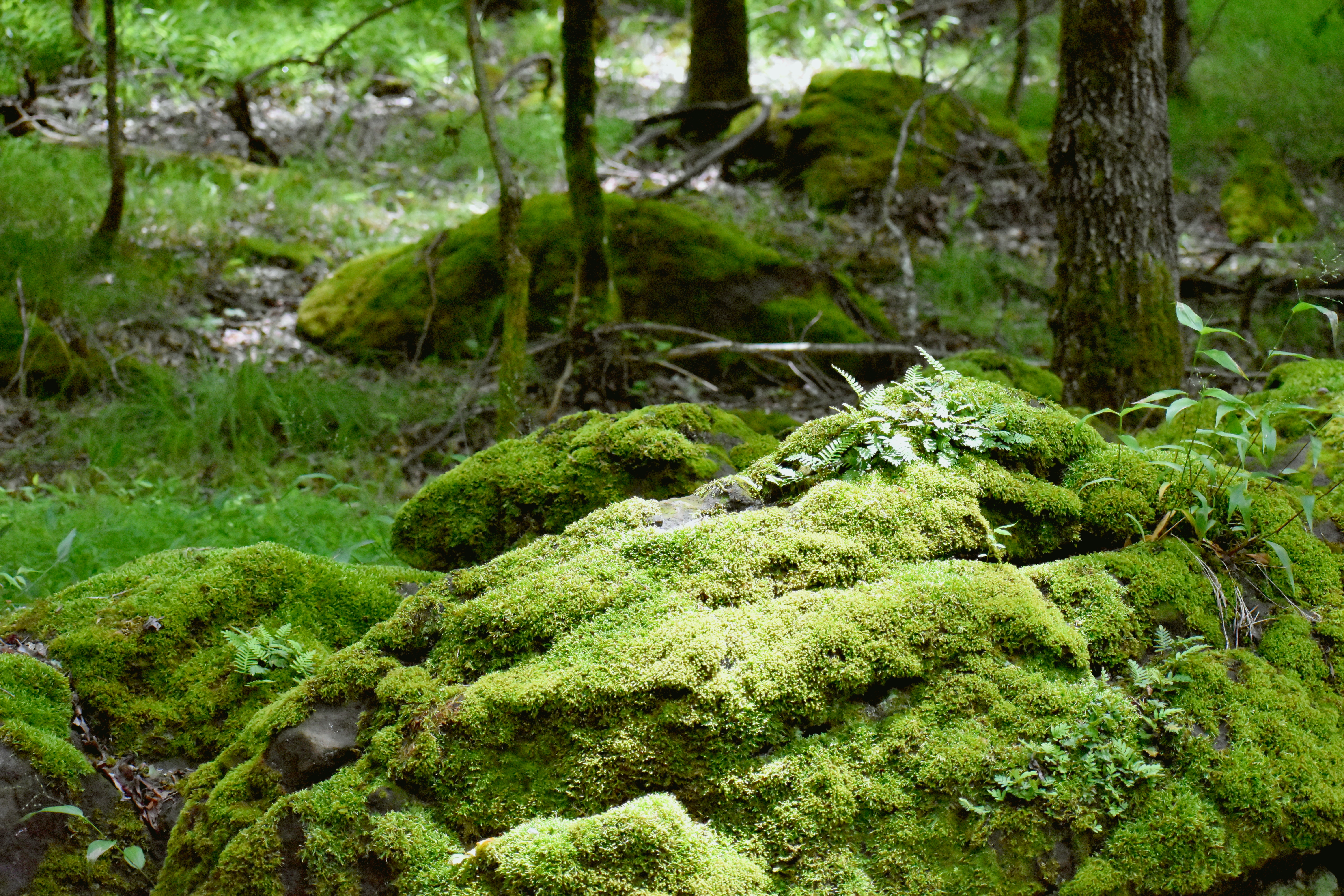 Today, magmatic lamproite comprises the northern half of the Prairie Creek Diatreme. You can see examples of this rock on the northwest side of the search area and on the north side of Prospector Trail. 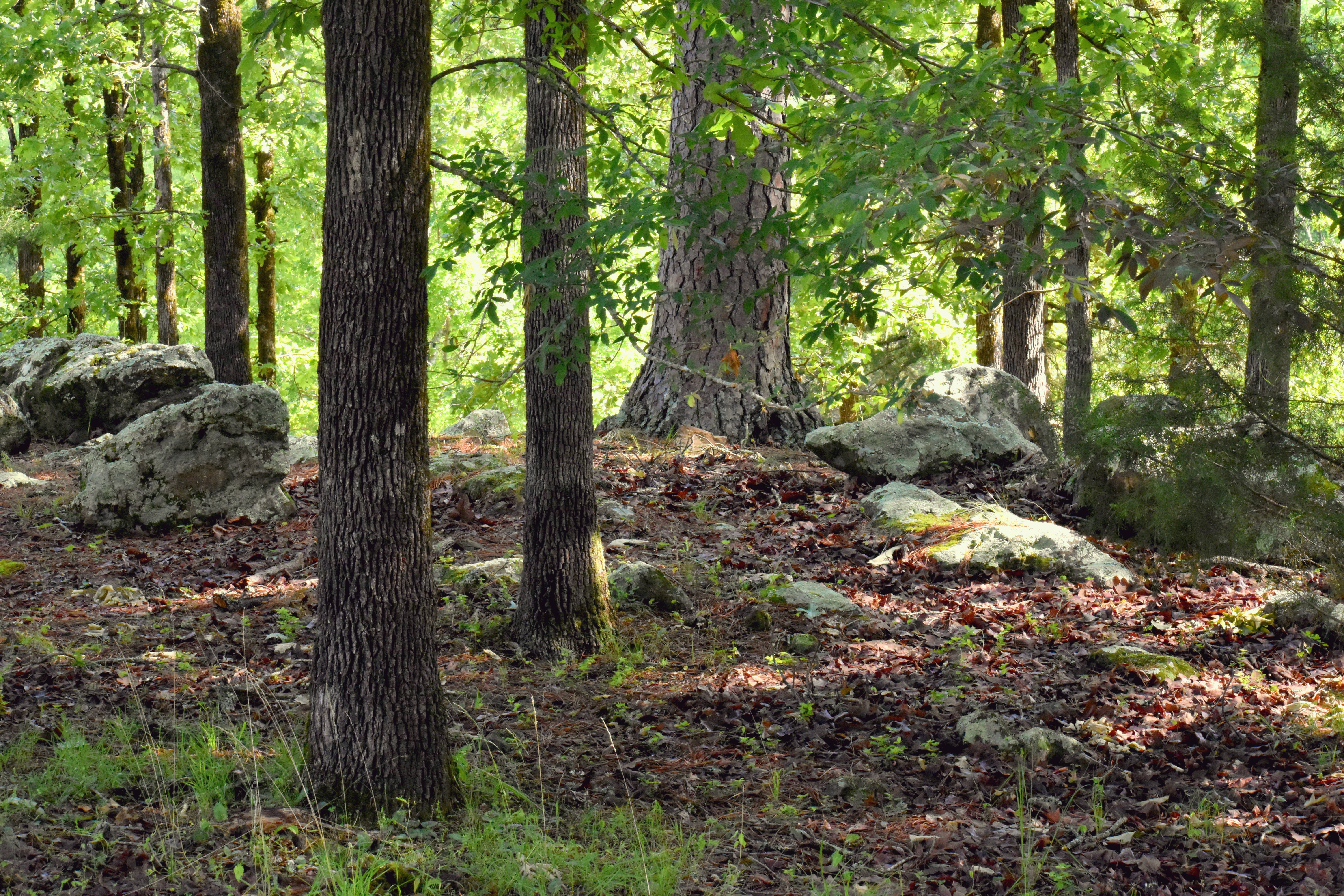 Another chapter tells the story of lamproite created by a marriage of surface sediments and volcanic rock.

Maar epiclastic lamproite formed in shallow crater lakes between eruptions, from a combination of lamproite and Cretaceous sands and clays. This rock has a gritty surface, like sandstone, and usually appears gray. 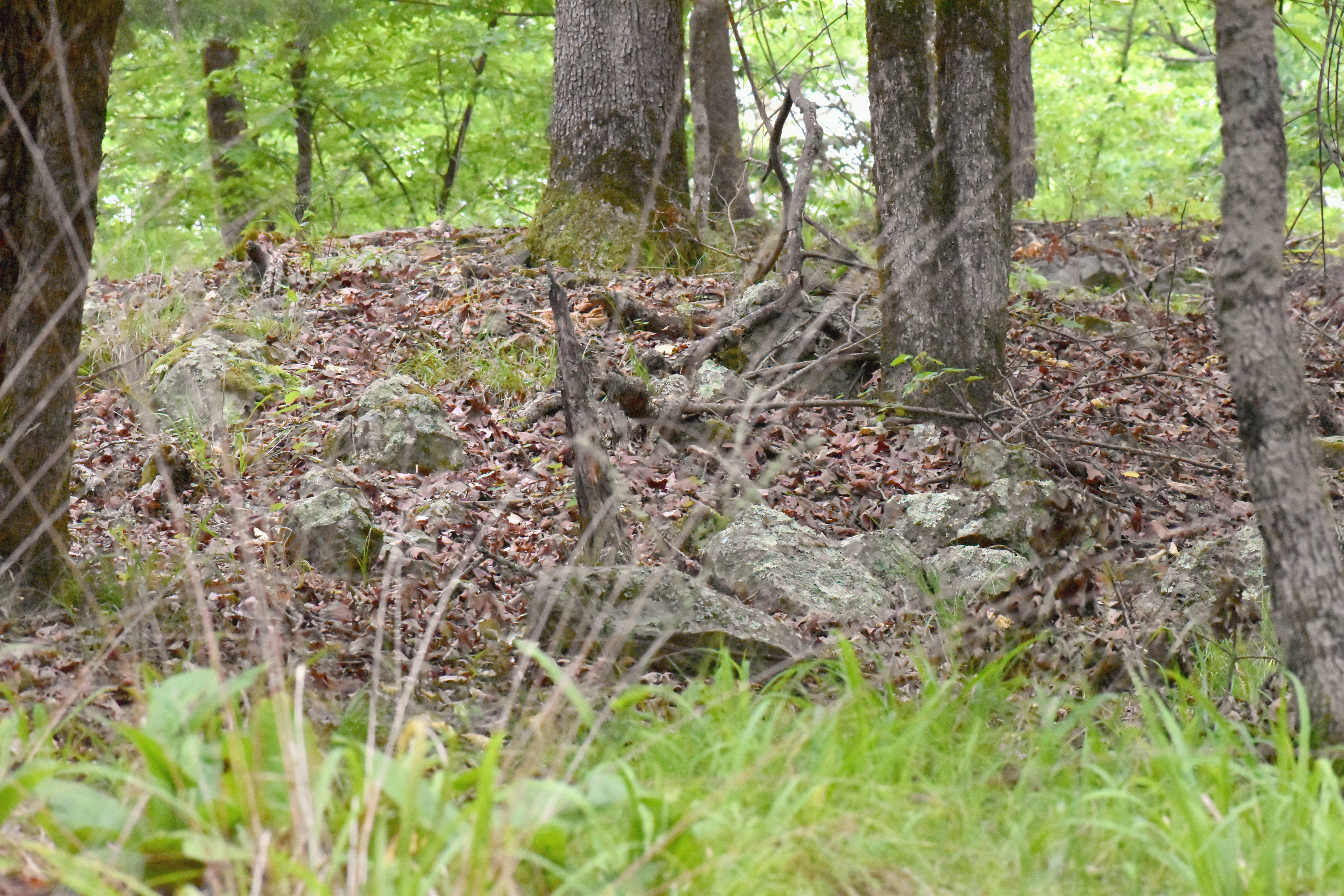 Diamonds are possible but unlikely in maar epiclastic lamproite because it is very dense and contains both diamond-bearing and non-diamond-bearing materials. At the park, you can see exposures of this rock along the northeast edge of the search area and along Prospector Trail, on the westmost point of the Prairie Creek Diatreme.

The story of the Prairie Creek Diatreme continues with you.

Although this diamond-bearing volcano is now extinct, signs of an eruptive history remain. Explore the Prairie Creek Diatreme during your next visit to Crater of Diamonds State Park, and uncover your own story!

For further reading about the geology of Crater of Diamonds State Park and Arkansas, visit the Arkansas Geological Survey website. More to the Story: Sanders Kitchen