Wings on the Wind

Sitting on a bluff overlooking a vast landscape is a great way to enjoy a September morning on Mount Magazine. Scanning the horizon with a good set of binoculars helps spot wings on the wind. Southward migration has started for many species of birds and some butterflies. The unpredictable nature of migration watching requires diligence. Some days are a bust due to weather conditions. But other days can be outstanding with a good diversity of species and numbers of individuals.

For the column of states including Minnesota, Iowa, Missouri, Arkansas, and Louisiana Mount Magazine is the highest point above sea level. Perhaps to a migrant it represents a landmark and/or an obstacle for navigation. For many it is a convenient rest stop. 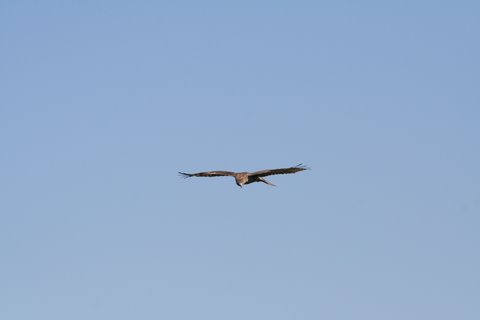 Broad-winged hawks usually top the tally. They rest overnight in forested areas. As thermals begin to build during the day, one by one, they leave the canopy to catch rising air. Circling in these unseen currents hawks gain elevation rapidly. It is possible to have over a hundred broad-winged hawks swirling in a thermal at one time.  This is called a kettle. Reaching the top of the thermal they slip out, with wings set, gliding southward. Losing elevation as they approach the northern edge of Mount Magazine where they take advantage of updrafts to lift them just over the bluffs.

Tall bluffs flanking Ross Hollow create a funnel which many birds of prey use to cross over the mountaintop as if it were a major highway. The northern tip of Cameron Bluff offers a great vantage point for scanning the horizon and the hollow. Birds can be above, below, or even at eye level, offering opportunities to study field marks for identification.

There are many other species seen migrating over Mount Magazine other than broad-winged hawks. Red-tailed, red-shouldered, Cooper’s, and sharp-shinned hawks, northern harriers, ospreys, vultures, bald eagles, American kestrels, and even peregrine falcons have been seen from Cameron Bluff during September. White pelicans, song birds, and butterflies are also seen.

Monarchs and a few other migrating butterflies use the same updrafts to lift themselves over the mountain. Many will take the Mount Magazine exit to refuel on patches of wildflowers along park roadsides. Tickseed sunflower must appear like “golden arches” to these adolescent insects. Late arrivals often cluster together on “tree hotels” with southwestern views.  Some monarchs will be tagged and released to continue their way southward to their winter vacation in Mexican mountains. 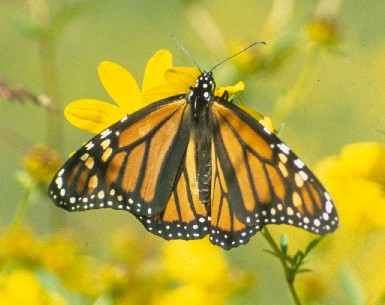 On the south side of the mountain migrating hawks seek out more thermals over the Petit Jean River Valley to help them get through the Ouachita Mountains. Turkey vultures are masters of riding updrafts and thermals. It seems as though some hawks key in on vultures to find thermals.

While sitting on Cameron Bluff, waiting for the next passerby, enjoy either solitude with a spectacular view or conversations with other watchers with various backgrounds and experiences. Pick up tips on hawk identification. Take advantage of unique photo opportunities.

So pack your binoculars, lawn chairs, water, and snacks, drive to the northern tip of Cameron Bluff Overlook Drive in Mount Magazine State Park, and watch wings on the wind. How do you measure up to the bald eagle?