What will you wear today and why?  I know for many days it’s a simple proposition for those of us in the “uniform” world of state parks. Can you say BROWN? When we move into the “personal” realm, however, there are all kinds of things that dictate the appropriate fashion statement. As we try to interpret the cultural history at Historic Washington State Park of 19th century Washington, Arkansas, we come up against some interesting realities that most folks don’t even suspect, let alone think about.  Both men and women had certain fashion dos and don’ts during the period, but for now, let’s focus on the ladies. 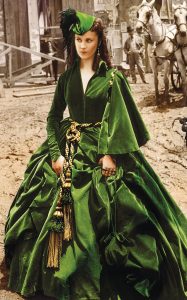 What do I mean? Well, numerous times we have a would-be ‘Scarlett O’Hara’ come into the wardrobe department with visions of grandeur in her head, or at least a vision from Hollywood about what a woman should look like in the antebellum period. You remember Scarlett, right? She was the star of “Gone with the Wind” the 1930s blockbuster set during the Civil War. I’ll bet a lot of folks out there remember the image of Scarlett, if not the movie plot. That beautiful green formal dress, made from fancy drapery material. Wow. There are a lot of people who want to look like this at living history events across this country. Sure, it’s great to pretend to be from another time and maybe even portray a loftier social status than in real life. But before our would-be ‘Scarlett’ gets dressed she needs to think about the realities. Let’s look at them, shall we?

Some of the important women reformers of the nineteenth century were seeking change in fashion. We are reminded of Emily Thornwell’s “The Lady’s Guide to Perfect Gentility,” a book of instructions on how to lift a petticoat under a dress. In mid-century, a woman of means wore five or six petticoats! (For those who don’t know, the petticoat is a type of underwear.) Thornwell wrote about the ways of lifting a petticoat in a graceful and decorous way when climbing stairs or walking on a muddy street. Oh yes, and there’s the corset. This instrument of controlled torture was designed to lace up around the waist and abdominal area and give the lady a “wasp” waist. The corset not only cinched in the waist but pushed up the breasts. The evening dress was typically sleeveless and cut low in the bodice. French-heeled shoes—typically three or more inches high—completed an evening costume. Still want to be Scarlett?

We thought we would see first hand the difficulties of dressing during this time period. Meg Matthews and Monika Rued with Arkansas State Parks went head to head to see who could get dressed in 19th-century dress the quickest. Even with a few tips to get them started, such as putting on their shoes before the corset so they could still bend over, it proved to be a difficult challenge!

Thornwell and her followers campaigned against the corset on the grounds that it imperiled women’s health. This also was her reason for criticizing low-cut evening gowns.   It was almost impossible to keep skirts clean. The popular writer Fanny Fern once quipped that women should be paid by New York City for sweeping the streets every time they took a walk. Still others saw in women’s dress the implements as well as the symbols of their subjection to men. Despite all this, dress reform was a dangerous topic. In a culture as intent upon distinguishing masculine from feminine as the United States in the nineteenth century, any change in a woman’s appearance was sure to provoke ridicule. Paula Wright Davis, who was determined to build a coalition in support of woman’s rights, decided it expedient to effectively ban any discussion of dress from the first national Woman’s Rights Convention held in 1850 in Worcester, Massachusetts. “We think the subject an all important one,” she wrote but “there is neither time nor room to treat it fitly now; no doubt future Conventions will devote to it the thorough consideration which it merits.” Despite the silence of the convention, opponents such as James Gordon Bennett, editor of the New York Herald, lost no opportunity to charge that woman’s rights activists sought to wear the “pantaloons” (pants).

So the next time you ladies enjoy your casual Friday at the office, just breathe a little sigh of thanks to the Emily Thornwells of the world! 5 Activities To Do In State Parks