Parks—Places Where “Everlasting Moments” Are Born

If you asked me what I ate for dinner yesterday, there’s a good chance I wouldn’t remember. Yet, I can recall in such detail—and with such clarity—encounters I’ve experienced in Arkansas’s state parks over the past 37 years since that winter day in 1973 when I, like so many of my colleagues here at Arkansas State Parks, choose this park system to be my life’s work, too. Those myriad moments—personal, poignant and often profound encounters that I lived through—are always with me. Some occurred in solitude. Others were shared experiences with park visitors, or friends and family. But these encounters when I connected with nature or history, or with another human being whose life was being enhanced by that time in that park, too, are etched in my mind, and in my heart, forever. Like the parks themselves, these memories are something I can always reconnect to. George B. Hartzog , Jr, who served as director of the National Park Service in the 1960s and early 1970s, keenly called these heart-moving minutes in a park that stay with us forever “everlasting moments.”

I’m picturing some of those everlasting park moments right now that occurred in early September in 2002. Back then during the final years of my beloved mother’s life, she lived near my two older sisters in northwest Arkansas. I would often drive from Little Rock to spend a day or two with Mother on weekends. While traveling back to Little Rock late that September afternoon after spending the day with her, I couldn’t shake this sense that I was supposed to take a detour off I-40 and go across Petit Jean Mountain.  As I approached the Russellville Hwy. 7 exit, I gave in to the mountain’s pull, took the detour and headed towards Petit Jean State Park. I’m glad I did. 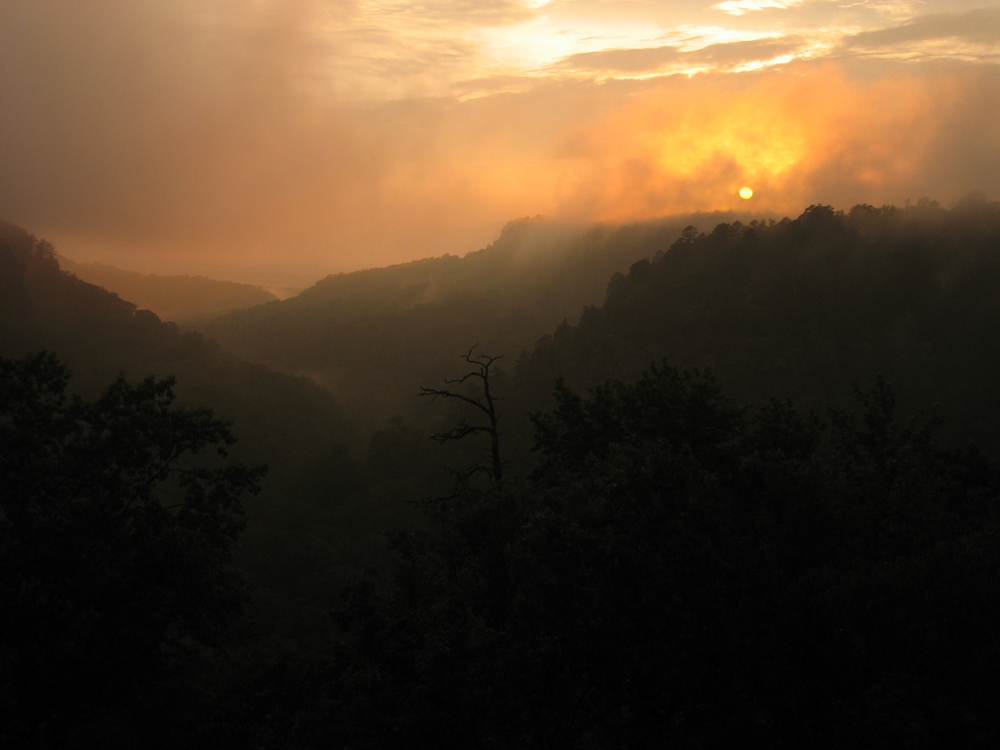 I hoped to watch the sunset from behind Mather Lodge, the park’s 1930s-era CCC lodge there on the bluff overlooking rugged Cedar Creek Canyon, but I missed being at that vantage point by just minutes. Instead, I watched the sunset through my rearview mirror as I drove along Ark. 154 from Centerville past Holla Bend. The months of August and September are when sunsets viewed from the lodge are often their most dramatic, and it was a spectacular sunset, although not viewed from where I hoped to watch it. I stopped briefly at the lodge, an Arkansas historic treasure where I worked in the mid-70s and which was the setting of so many cherished park memories.  Then, I headed through the park to Stout’s Point on the mountain’s east brow to enjoy the sweeping scenery from that overlook. I walked around the overlook’s elevated walkway and then climbed up a large rock so I could sit and enjoy the view of the Arkansas River and valley below. Twilight darkened to dusk.  As the minutes went by, the night grew darker. Far down below in Morrilton, located there alongside a big curve in the river, the lights of the city were shining brightly. As far as I could see, lights marked where other smaller communities were scattered through the Arkansas landscape.  Those lights were mirrored by stars shining in the clear sky above me.

Eventually, all the other sightseers left, but I was in no hurry to go. That time there in that park was so peaceful, and so perfect.

Then I noticed a man with long dark hair walking along the opposite side of the walkway. He didn’t see me. The man stopped and looked to the east at the view across the Arkansas River. He stood there perfectly still in that position for several minutes. As I watched his dark silhouette against the darkening blue of the night sky, I saw him reach down and pull something out of a long slender bag. He raised the long straight object to his face. Suddenly, I felt panic wondering if he was about to take his own life and I would be the silent witness to his act. Just as I was drawing my breath to call out and make my presence known, he began to softly play his American Indian flute. I sat there spellbound listening as he played the Cherokee courting flute. I’ve attended many a musical performance in my life. None were more memorable than this. I’ve sat in many a concert hall featuring acoustic ceiling panels and walls, but none were more beautiful, or offered any better acoustics that I can remember, than this park setting. He continued to play for, I guessed, well over half an hour. The only sounds accompanying his flute were crickets, cicadas and the wind rustling leaves.

Only two people were experiencing this park experience—a Cherokee playing his love flute in thanks to Mother Earth and Father Sky and an unnoticed Arkansas State Parks staffer who took a detour off a busy highway.

As he played, I quietly, and reverently, took it all in—his music, the view from the mountain, the night sky. I thought about the time I’d watched a sunrise from this same overlook almost three decades earlier with two park colleagues the day before I left Petit Jean to go work at another Arkansas state park. I can still remember every moment, color and detail of that sunrise. I knew I’d remember every detail of this starlit concert, too.

I finally made my presence known as he was heading towards his car, and we spent about an hour talking. The story he shared with me was as moving as the earlier sounds from his flute. He said that an elder Cherokee had dreamed about him and then sought him out to tell him to learn to play the flute. It would be part of his destiny. And so, this young Cherokee would drive from Russellville to Petit Jean Mountain in the evenings and play his flute from points north, south, east, and west there on the mountain in tribute to earth and sky. Ironically, because of the lure of the mountain and my detour that late afternoon, I was destined, too, to be there and witness his flute playing at the park’s overlook on the mountain’s east brow. 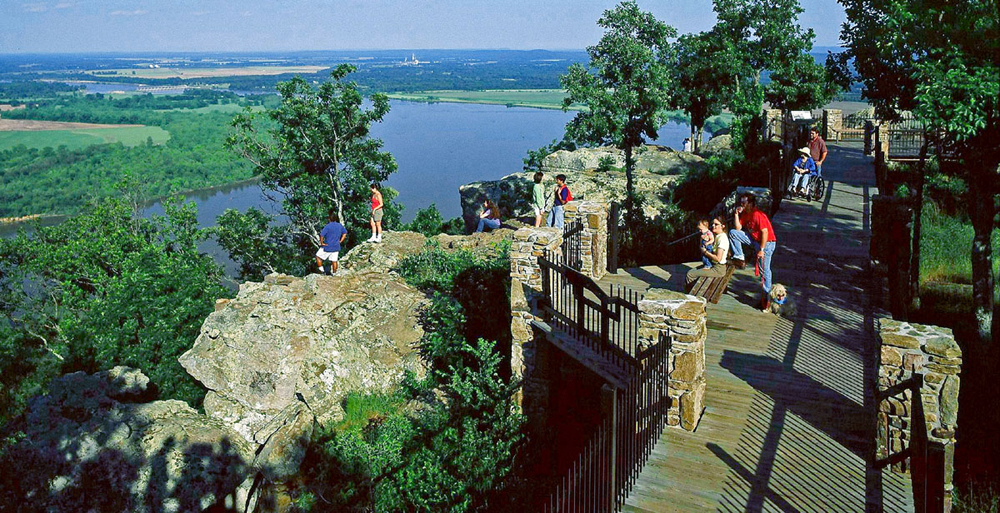 Arkansas’s state parks are here to protect natural and cultural resources.  They’re here for outdoor recreation and to support tourism, too. And the parks are here to connect us to those natural and historic resources, and to inspire those personal and profound “everlasting moments” that become memories we cherish a lifetime. As George Hartzog said as he reflected on the first time he stood on the south rim of the Grand Canyon and looked at that magnificent view in front of him, “These are everlasting moments that stay with you and influence your life all your life.”

The next time your travels present the opportunity for a detour to an Arkansas state park, I hope you take it so you can experience some everlasting moments, too.