This article will allow you to discover the rich and diverse history of this area, how we interpret and share that history, and how we protect it.

What is now the body of water called Lake Dardanelle was once simply the Arkansas River, a life source to plants and wildlife, as well as the Native Americans and settlers who migrated here. One river many voices.

The voice of early European explorers came from Spain, then France, as Arkansas was claimed by each of these countries before it officially became part of the U.S. in 1803 as part of the Louisiana Purchase. Hernando de Soto was the first Spanish explorer to travel into Arkansas in 1541. Nearly 130 years later, French explorers began to arrive: Marquette and Joliet arrived in 1670, followed by Sieur de la Salle, Henri de Tonti, and Jean-Baptiste de la Harpe, to name a few.

Another set of voices is that of the Osage, who claimed this area as hunting grounds, and that of the Cherokee who began moving to this area in the late 1700s, fleeing the persecution they faced in their homelands in Georgia, Tennessee, and North Carolina. Those first Cherokee that moved to this area are known today as the old settlers. They first moved to eastern Arkansas in the area surrounding the St. Francis River. After earthquakes in 1811 and 1812, they decided to move west to the Arkansas River valley. Upon settling along the Arkansas River from Point Remove Creek to Mulberry Creek, they were assigned an Indian Agent in 1813, named William Lovely. His job was to settle the unrest between the Cherokee and the Osage whose hunting lands were infringed upon.

In 1820 there was a lot of pressure on Southeastern tribes to move west. The Choctaw, who were trying to gain protection from encroachment, ended up making numerous treaties to try and secure a place for themselves. This is how some of the Choctaw ended up in Arkansas for a brief period. In 1820, they signed the Treaty of Doak’s Stand. This ceded Choctaw lands in Mississippi for land in Arkansas, surrounding what is now Dardanelle, bringing yet another Native American voice to this river valley. 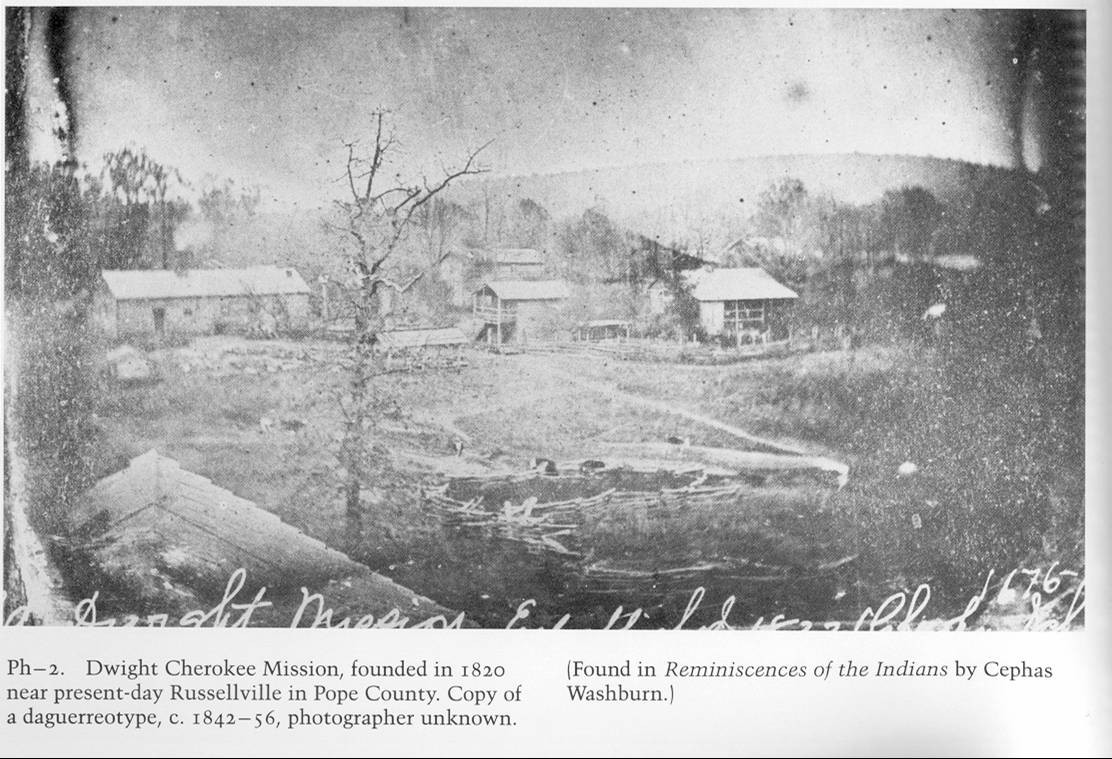 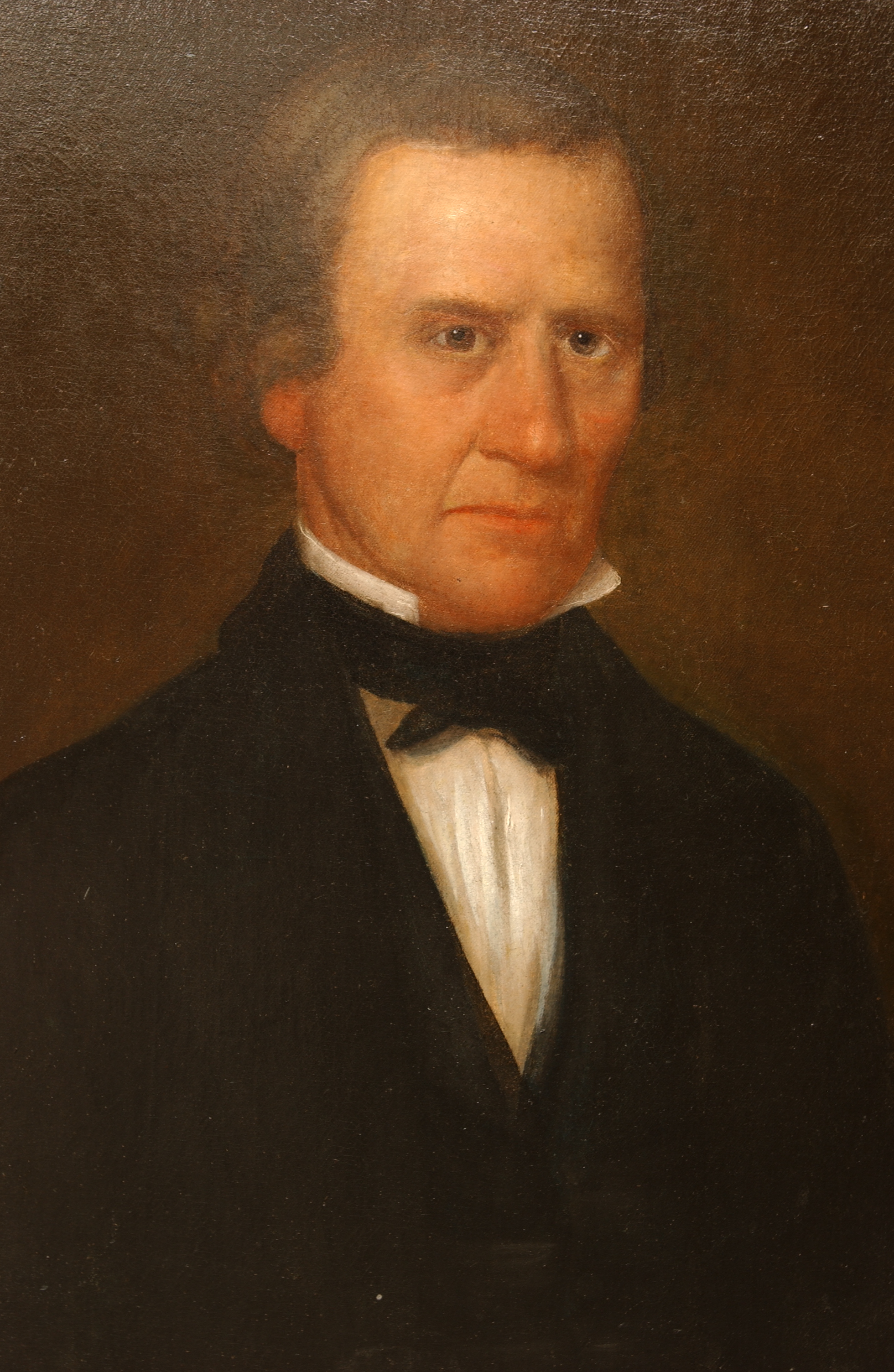 In 1822 the Dwight Mission opened. It was not only the first school in Arkansas, but also the first one west of the Mississippi River. Dwight Mission was established on the banks of the Illinois Bayou, under the leadership of Cephas Washburn, for the children of the Cherokee old settlers. Under Washburn’s supervision, the mission grew and so did attendance. Children learned reading, arithmetic, and many other skills at school. With the growth of the school, more supplies were needed. The Eagle resupplied the mission, being the first steamboat to reach north of Little Rock.

At the same time Sequoyah, who created and perfected a written syllabary for the Cherokee people, lived here on the Illinois Bayou from 1824-1829. He taught his syllabary to all who were willing to learn it. The Cherokee Nation officially adopted the syllabary in 1825. The Cherokee again began to feel pressure to move west to “Indian Territory” and in 1828 they did. The next year Dwight Mission followed. Today all that remains of the old mission is the cemetery. The area where the buildings were located was flooded with the creation of Lake Dardanelle.

1830 was a tumultuous year. The Choctaw signed the Treaty of Dancing Rabbit Creek and that is when removal began for them. After many broken and forgotten treaties, the U.S. Government passed the federal Indian Removal Act of 1830 and began rounding up Cherokees in the East, beginning their forced migration that would be known as the Trail of Tears. The first 3 detachments of Cherokee were sent to “Indian Territory” via water, for which Lake Dardanelle State Park is a certified National Trail of Tears site. Native Americans made decisions here that changed their lives. If they continued on water, they had to board keel boats because the larger boats could not make it any further upriver. If they decided to continue the journey on land, they had to walk the rest of the way to what is today, Oklahoma. There were 17 Cherokee detachments total; the Water Route and the Bell Route came through this area. Those first three detachments faced such misery; Chief John Ross requested permission to supervise their own removal and this was granted for remaining detachments. The roughly 800-mile journey known as the Trail of Tears is a story of greed, hardship, and perseverance; belonging not only to the Cherokee, but all the major Southeastern tribes. The Choctaws, Chickasaws, Muscogee (Creeks), and Seminoles also had groups that used the water route on the Arkansas River during their forced migration to present-day Oklahoma. 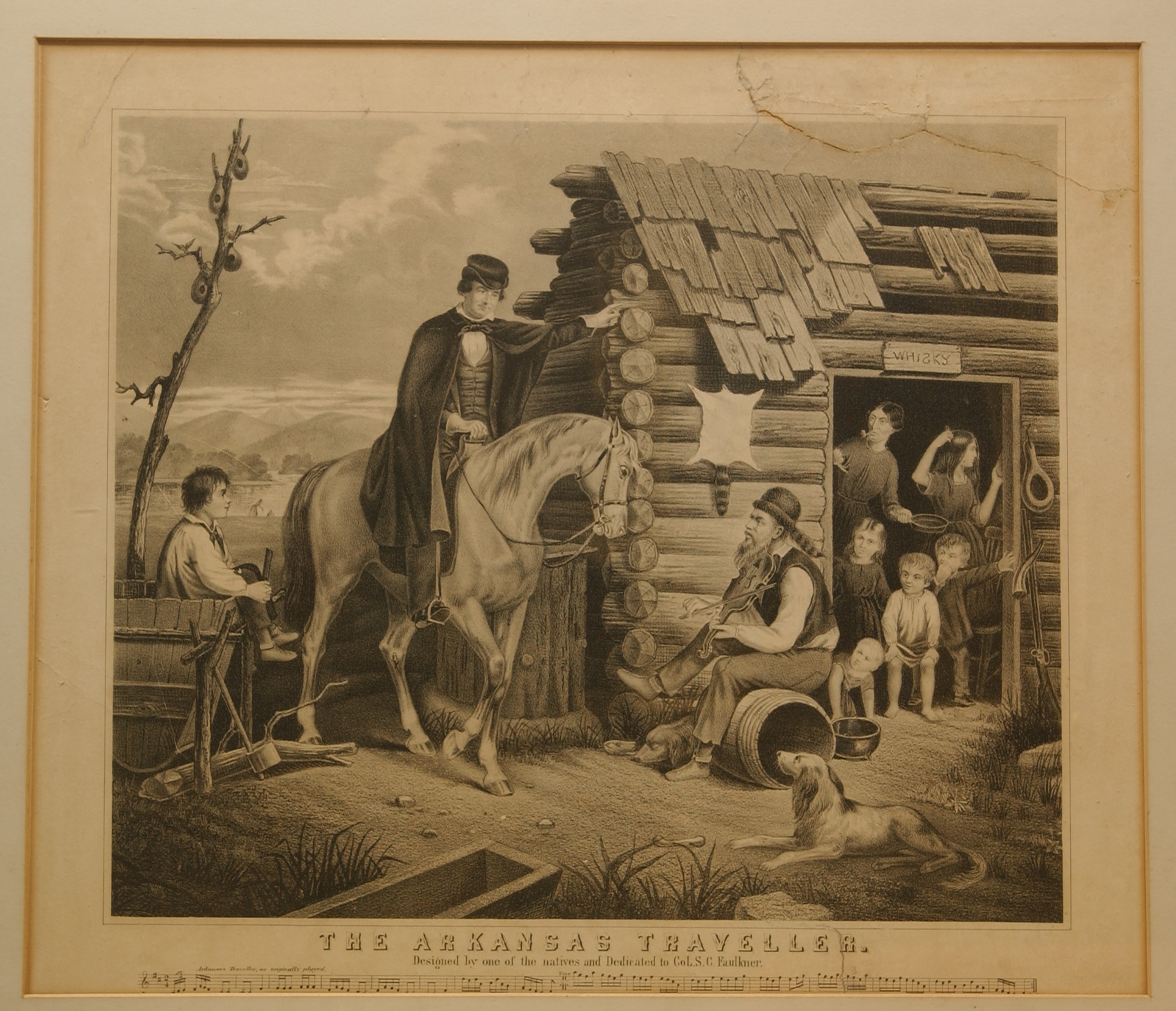 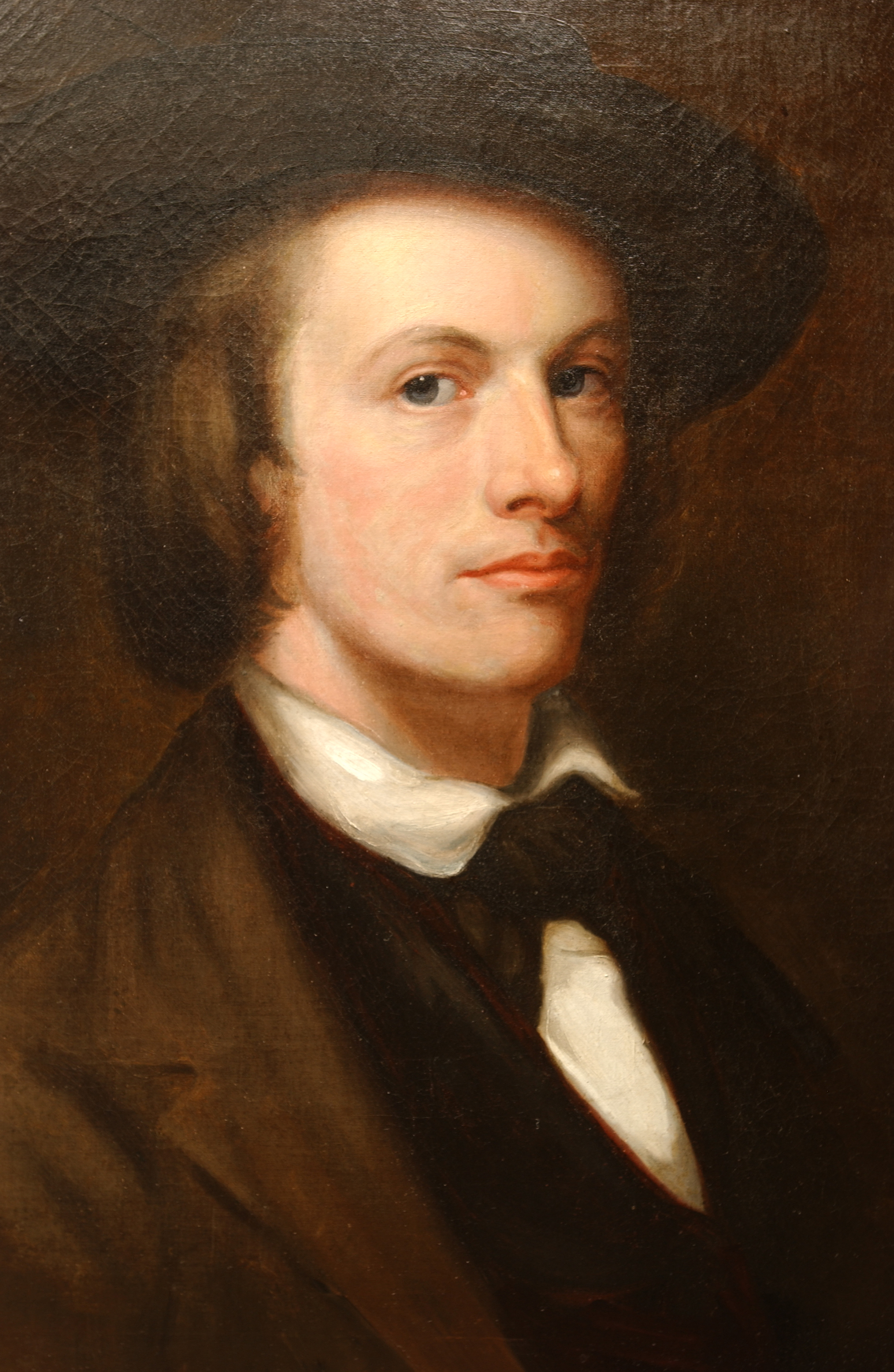 After Indian removal, the area was settled by people from around the world, bringing more voices to the river. They began building the town and commerce. For some it may be difficult to visualize the Arkansas frontier but a picture is worth a thousand words. The Arkansas Traveler, painted by Edward Payson Washbourne, son of Cephas Washburn gives voice to the frontier era. He was a self-taught painter traveling the river creating portraits. During his travels he met Colonel Sanford Faulkner, who told him a story of how he got lost on his way home and encountered a fiddling squatter.

In 1856 Edward was inspired by the Colonel’s story and he chose this river valley as the scenery for his famous painting. Behind the squatter’s log cabin is the Arkansas River and the outline of Mount Nebo, a scene that is often viewed today by visitors to Lake Dardanelle State Park (see photo at the top of this article). Still today, this painting tells a different story of the Arkansas frontier to all who view it.

The Arkansas River, now wide and calm, created Lake Dardanelle, due to the construction of the McClellan – Kerr Navigation System which placed a series of locked dams and lakes (reservoirs) along the river’s course. This river, although previously unpredictable, has been a source of life in this area since Native Americans originally claimed the land.

From Native Americans, to European explorers, to the many trappers and settlers that moved to the area for its vast resources, Lake Dardanelle is one river with many voices.

All of Arkansas’s state parks have unique stories to tell. I encourage you to take time and explore some of the certified Trail of Tears sites in the state park system. These parks have outdoor exhibit panels to give you more information on how they fit into the Trail of Tears story, there is even a section of original trail for you to walk at Village Creek State Park.

Sasha Bowles is a Park Interpreter II at Lake Dardanelle State Park. She and her family take every opportunity to enjoy the beauty of Arkansas. She is enthusiastic about sharing her love of nature and area history with park visitors and the community. The Best of DeGray State Park