The 35,000th diamond found at the park by Scott Kreykes 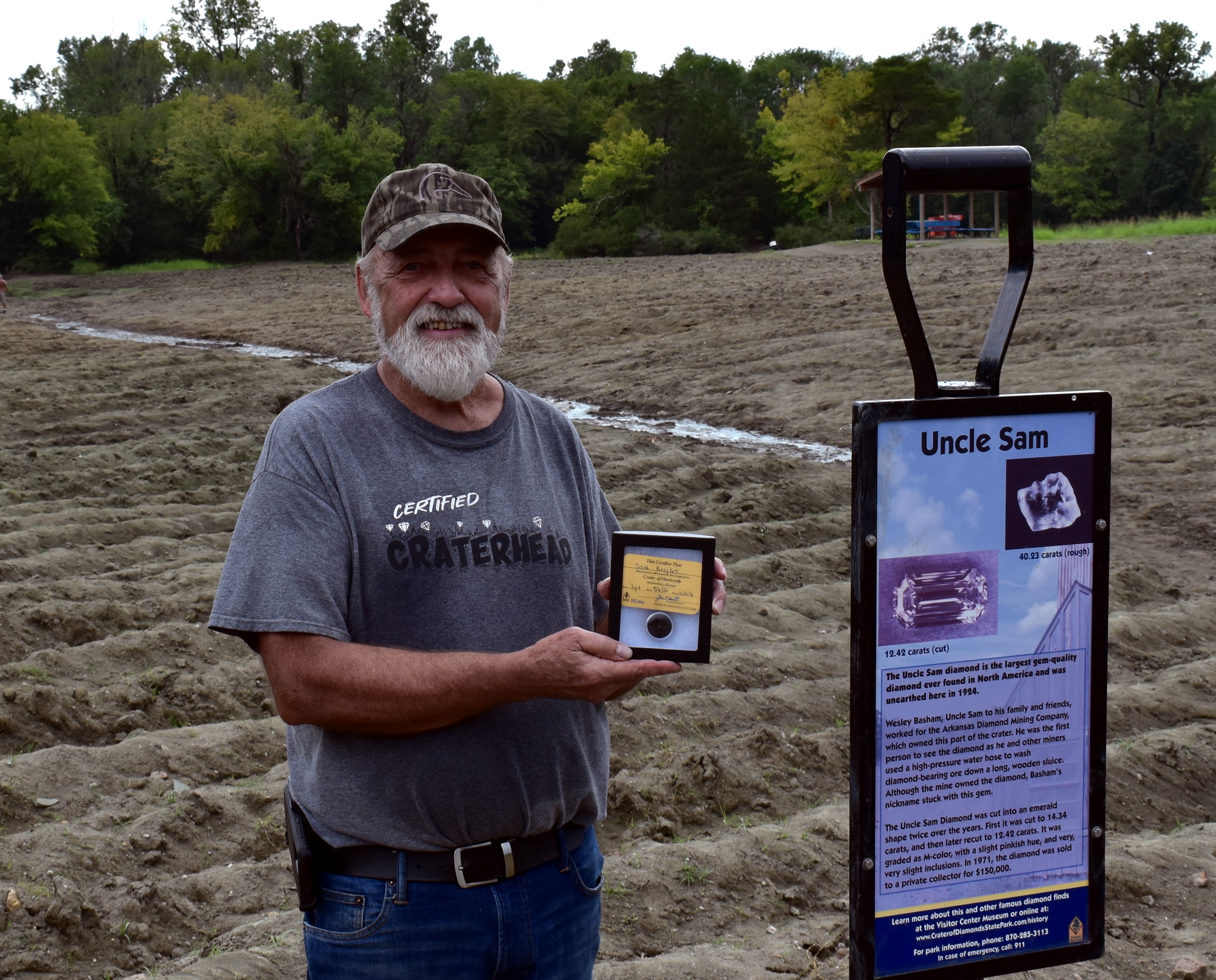 Scott Kreykes of Dierks has been visiting Crater of Diamonds State Park for the past four years and has registered more than 80 diamonds. On Sept. 6 he registered his 50th diamond of the year and the 35,000th found and registered since the state park opened in 1972.

Kreykes recently spent a day at the park sifting dirt from the East Drain of the diamond search area. He took his sifted gravel home to look through later. Park Interpreter Tayler Markham said, “Each visitor that comes to the park is allowed to take one five-gallon bucket of sifted gravel home with them per day. Some visitors like to resift their gravel at home or wait for it to dry to look for the metallic shine of a diamond.”

While searching through his gravel at home, Kreykes spotted a pearl-shaped diamond and excitedly called his wife over to show her. He knew the park was preparing to celebrate the 35,000th diamond find since 1972 and was hopeful that he would register the milestone gem. As he left for the park on the morning of Sept. 6, he slipped his diamond into a glass vial and told his wife, “This could be the 35,000th diamond!”

Kreykes carried his gem to the park’s Diamond Discovery Center, where staff registered it as a 4 pt. white diamond. Markham said, “Diamonds are weighed in points and carats. One hundred points is equal to one carat, like pennies to a dollar. Most diamonds found at the park weigh between 20 and 25 points.” When park staff revealed that Kreykes had indeed registered the 35,000th diamond, he told them he had goosebumps.

As finder of this significant milestone, Kreykes received a free two-night stay at an Arkansas State Park, recognition from Murfreesboro officials, and a special display for his diamond and registration card, donated by Sam Johnson and Caddo Trading Co.

Many people who find diamonds at Crater of Diamonds State Park choose to name their gems. Kreykes chose to name his jewel Leo, after his grandson.

As of this date, 510 diamonds have been registered at Crater of Diamonds State Park in 2022. An average of one to two diamonds are found by park visitors each day.

Diamonds come in all colors of the rainbow. The three most common colors found at Crater of Diamonds State Park are white, brown and yellow, in that order.

The largest diamond ever discovered in the United States was unearthed in 1924 during an early mining operation. Named the Uncle Sam, this white diamond with a pink cast weighed 40.23 carats. It was later cut into a 12.42-carat emerald shape. The Uncle Sam is now part of the Smithsonian’s mineral and gem collection and can be seen at the National Museum of Natural History.

Another well-known diamond from the park is the Strawn-Wagner. Found in 1990 by Murfreesboro resident Shirley Strawn, this 3.03-carat white gem was cut into a round brilliant shape weighing 1.09 carats. It graded as ideal cut, D-colorless and flawless and was set in a platinum and 24-carat gold ring. In 1998, the State of Arkansas purchased this diamond for $34,700 in donations and placed it on permanent display at the park visitor center.

On Labor Day 2020, Kevin Kinard of Maumelle found a large, brown gem weighing 9.07 carats. It is the second-largest diamond found at Crater of Diamonds State Park.