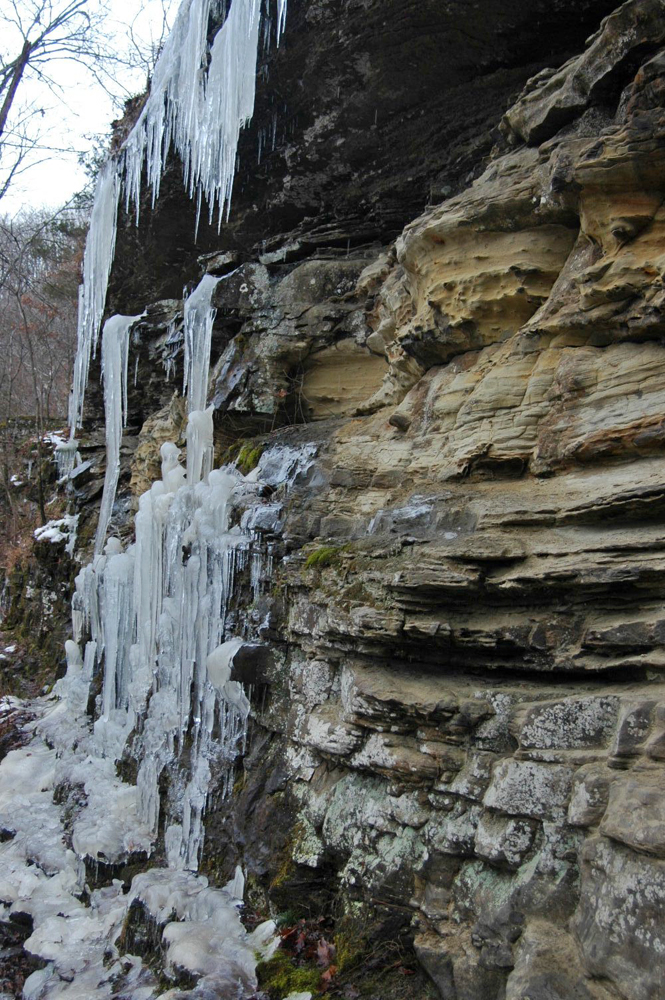 The white blanket of snow piled inches deep brings an exquisite stillness to the landscape of Devil’s Den State Park. Icicles linger from the tops of torpid bluffs, slowly dripping their steady eroding force down the sandstone layers. Drip, drip in the sparkle of sunlight. Cedar waxwings dart between underbrush hoping for winterberries. Deer tracks prominently weave down well-worn paths.

It seems that winter reveals a secret beauty only shown to the brave visitor willing to adorn thick socks, gloves, and hat and be invigorated by a deep breath of the crisp, cool air. For these courageous souls, the exposed bluff layers with their leafy camouflage returning to the earth, the panoramic views uniting the valley and ridge with the horizon as far as the eyes can see, the glitter of snow and icicles enhancing every clump of moss and shard of shale, and the tranquility of the trails is theirs alone.

For shelter from the shivers of the cold, all one has to do is venture into Devil’s Den Cave. There the 54 degrees of the cave feels warm and a completely new stillness awaits. 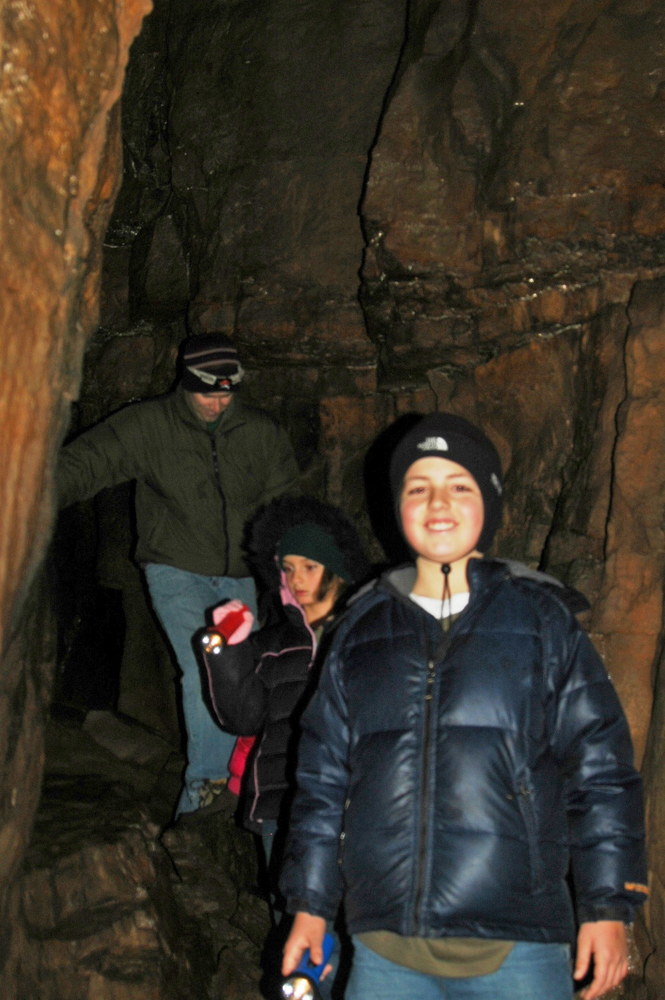 The unique sandstone crevice caves found at Devil’s Den State Park offer an intriguing immersion into the literal center of the layers of geology that support all life in the park. Typically upon entering their immenseness, one senses the stability and security of the rock walls. Not only do these walls lure in thousands of visitors each year, but they also make inviting hibernacula for at least five of the sixteen species of bats known to live in Arkansas, including the tri-color bat, the big brown bat, the Northern long-eared bat, and two endangered species: the Ozark big eared bat and the Indiana bat.

While at rest in hibernation, bats’ body functions slow, their temperature drops, and their immune systems become compromised. However, their long winter naps are essential to their survival, for in the winter, they cannot forage on the millions of pounds of insects they eat nightly during the warm spring through fall nights. Being awoken during this delicate period is devastating to the bats.

This winter however, it is not the excited shrills of thrilled visitors that park staff fear will wake these vital flying mammals, but rather a filamentous fungus known as Geomyces destructans that produces a distinctive ring of growth around the muzzles of bats — a condition known as white nose syndrome. White nose syndrome (WNS) was first noted in a cave near Albany, New York in the winter of 2006. Since that time, WNS has been detected in eight other states and has infected hundreds of thousands of bats within dozens of caves with a 90% mortality rate of infected populations. At this rapid rate of spread, scientists and resource managers fear that the loss of these natural insecticide agents could have one of the most devastating environmental impacts felt ever. 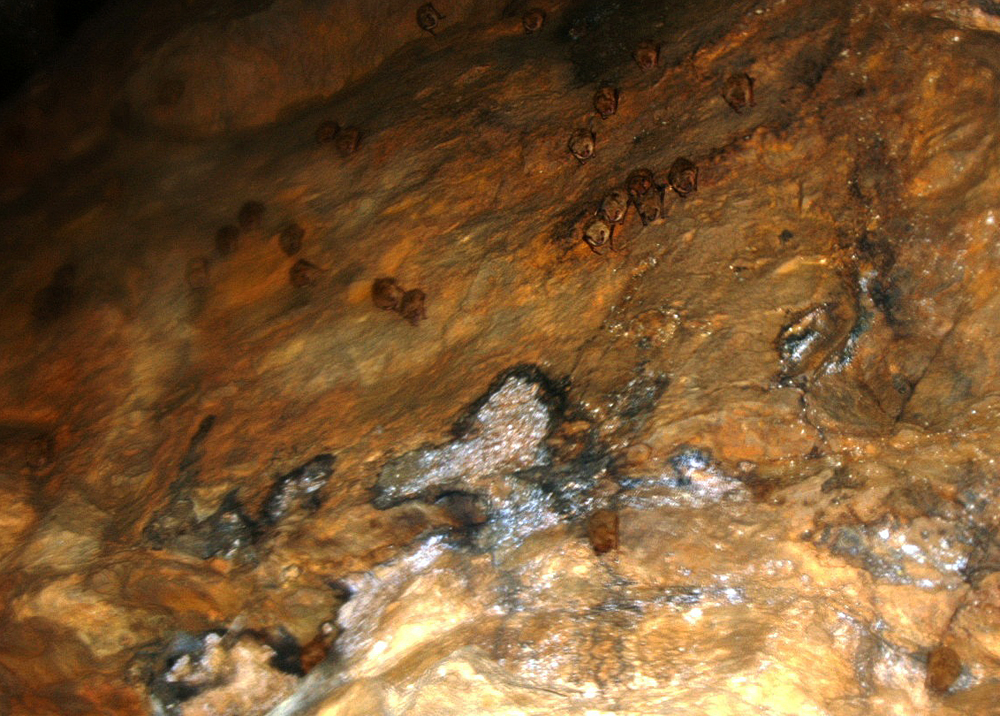 Unfortunately, there are still many unknowns about what is spreading the fungus and how it is killing the bats. One theory is that unsuspecting cavers are the carriers of the fungal spores and that the fungal infection acts as an irritant to the bat, causing it to wake and use precious stored fat reserves meant to last all winter. In a precautionary effort to protect these ecologically significant species, caves across the Northeastern United States are being closed to the public. In addition, visitors to caves that are still open are being asked to make sure that their clothing and gear have been decontaminated. Decontamination procedures can be lengthy, including submersing gear and clothing in a solution of one part bleach to nine parts water, or simply not wearing any clothing or taking any gear that has been used in cave environments before. (a complete list of procedures) 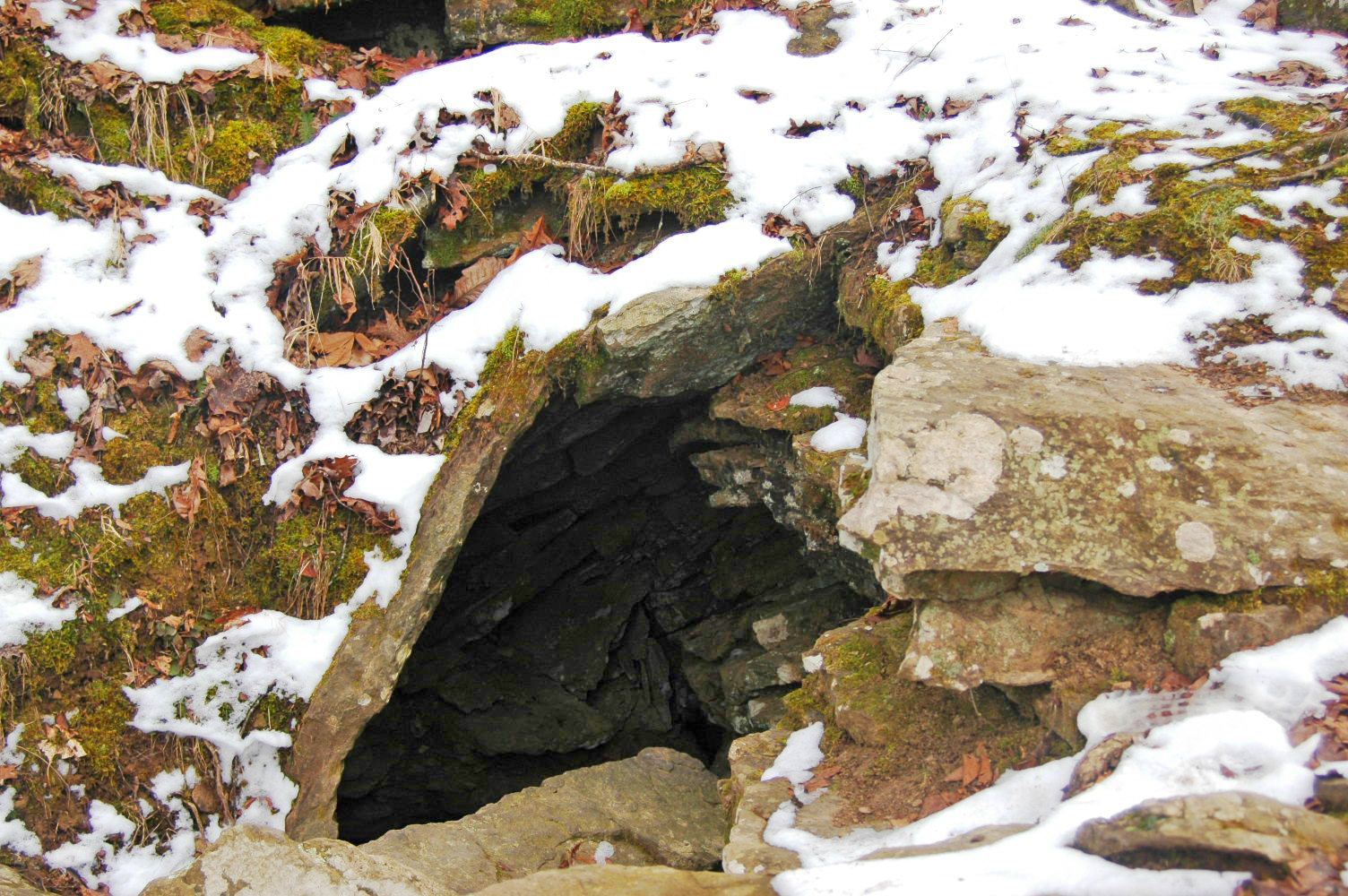 As the threat moves closer to our area, our park staff is working with multi-state agencies to develop a plan to protect our fragile bat populations. At this time, Devil’s Den State Park has closed three caves to the public, two of which are known hibernacula of endangered species of bats. We hope that through education of the public about this potential threat, we can prevent the spores from entering our caves without having to close them.

However, our job is not only to educate the public about Arkansas’s amazing resources, but also to protect them for future generations. Please help us to spread the word about the potential threat of white nose syndrome that any visitor could be carrying on a shoe, flashlight, or glove that has been into an infected area. Though the park feels at peace and the stillness serene, there is a silent struggle to protect one of Devil’s Den’s favorite winter residents — the bats!