Sometimes, a vacationing tip pays off in a big way. Josh Lanik, a 36-year-old schoolteacher from Hebron, Nebraska, recently visited Crater of Diamonds State Park on a family vacation, after learning about Arkansas’s diamond site from a coworker who once lived in The Natural State. After spending about two hours searching for diamonds on July 24, Lanik left with a brandy-colored gem weighing just over two carats.

According to Lanik, he was searching near the southwest edge of the park’s 37.5-acre diamond search area when he picked up the diamond. “We took the kids to look for amethyst on Canary Hill, and I was walking through an area where it looked like a lot of water had washed when I saw it.” Lanik found his diamond about 15 feet from the West Drain, a trench that runs along the western border of the park’s diamond search area. 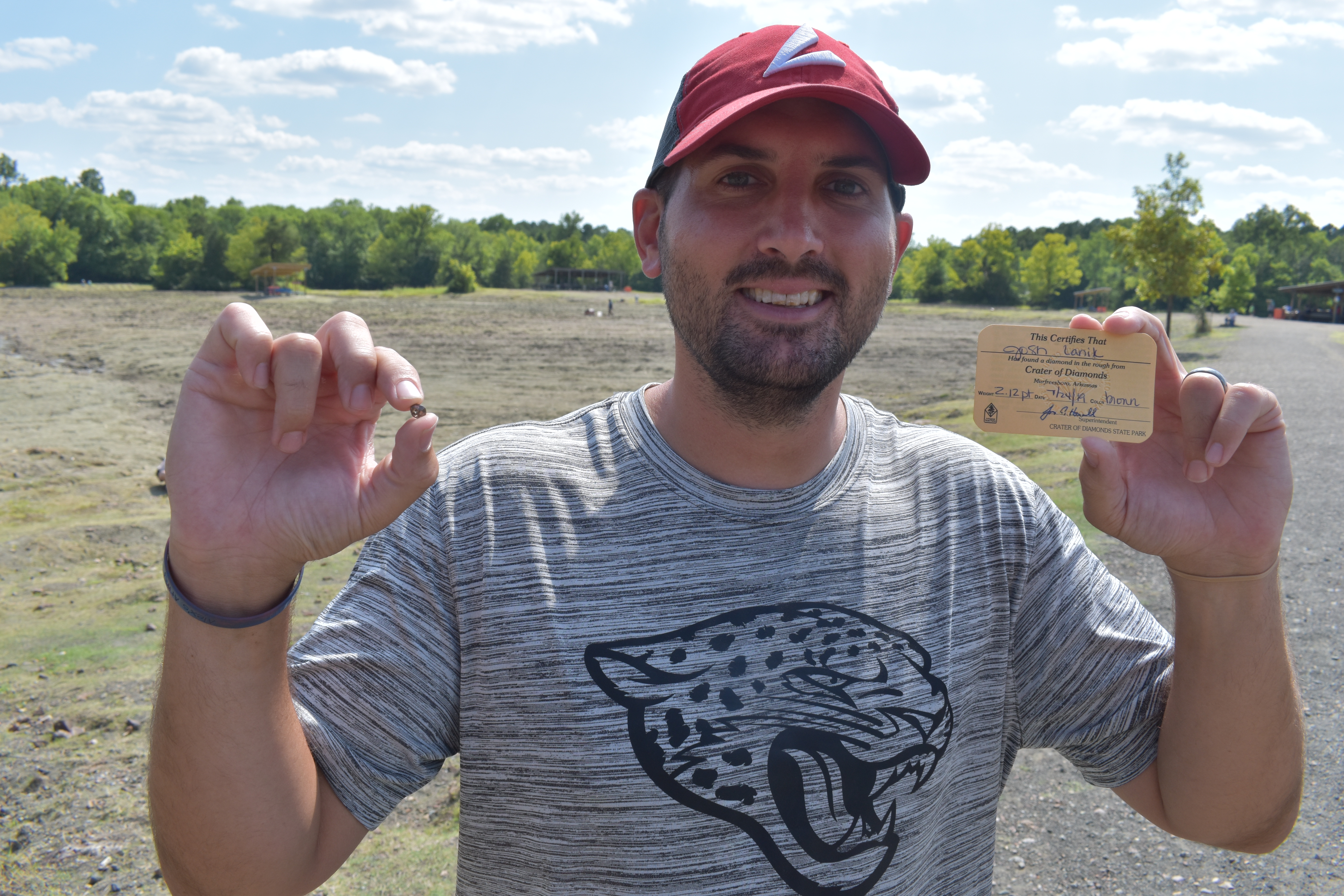 At first, Lanik said he wasn’t sure of what he had found, but he knew it was something unique. “It was blatantly obvious there was something different about it. I saw the shine, and when I picked it up and rolled it in my hand, I noticed there weren’t any sharp edges.” Lanik showed the gem to his wife, who was searching nearby, and dropped it into a brown paper sack with several other rocks and minerals.

Before leaving the park, the family stopped by the Diamond Discovery Center to have their finds identified. Lanik said that when he poured the contents of the paper sack onto the counter, a park employee put his brown gem into a pill bottle and took it into the office for a closer look. He noted, “She wouldn’t tell us whether it was a diamond, but we were pretty sure from her reaction that it was.” After identifying and weighing the gem, park staff brought Lanik into the office and informed him that he had discovered the largest diamond found so far in 2019.

Park Interpreter Waymon Cox noted that recent record-breaking rainfall likely contributed to Lanik’s find. “About 14 inches of rain fell at the park on July 16. In the days after the rainfall, park staff registered numerous diamonds found right on the surface of the search area, including two weighing over one carat.” 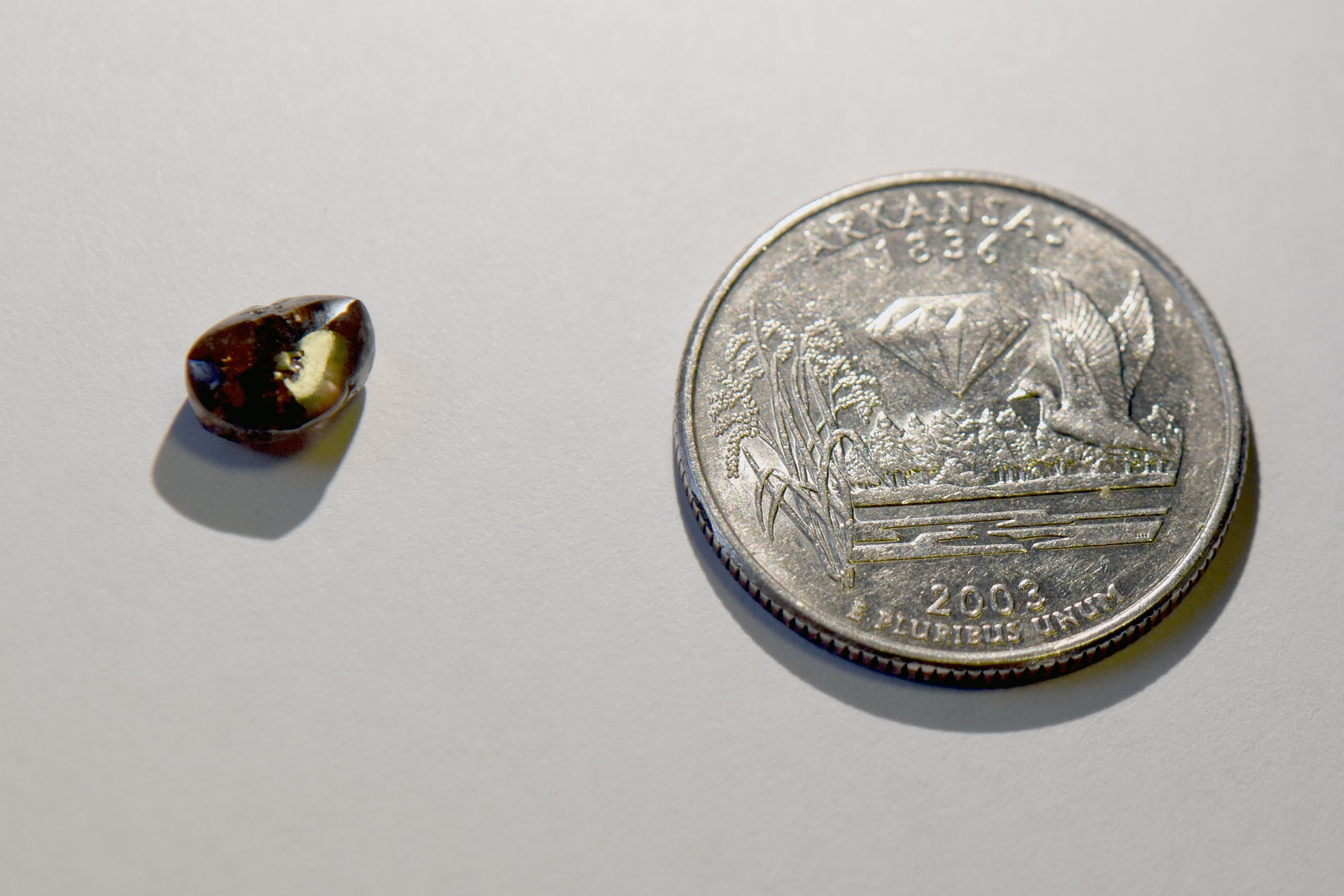 Cox continued, “About one out of every 10 diamonds registered by park visitors is found on top of the ground, including many of the largest ever found at the Crater of Diamonds.” Park personnel plow the diamond search area, the eroded surface of an ancient, diamond-bearing volcanic crater, periodically to loosen soil and assist with natural erosion. Diamonds are a bit heavy for their size and lack static electricity, so dirt doesn’t stick to them. When rainfall uncovers larger diamonds and the sun comes out, they sparkle and are often easy to see.

According to Cox, “Mr. Lanik’s gem is about the size of a jellybean and has a dark brown color, similar to brandy. It has a beautiful natural pear shape and smooth, curved facets that give the gem a metallic shine.”

Many visitors choose to name the diamonds they find at Crater of Diamonds State Park. Lanik named his gem the Lanik Family Diamond to remember this special experience with his family. When asked whether he plans to sell his gem or keep it as a souvenir, Lanik said he plans to keep it, for now.

As of this writing, 296 diamonds have been registered at Crater of Diamonds State Park so far in 2019, weighing a total of 53.94 carats. 11 diamonds registered this year have weighed at least one carat each.