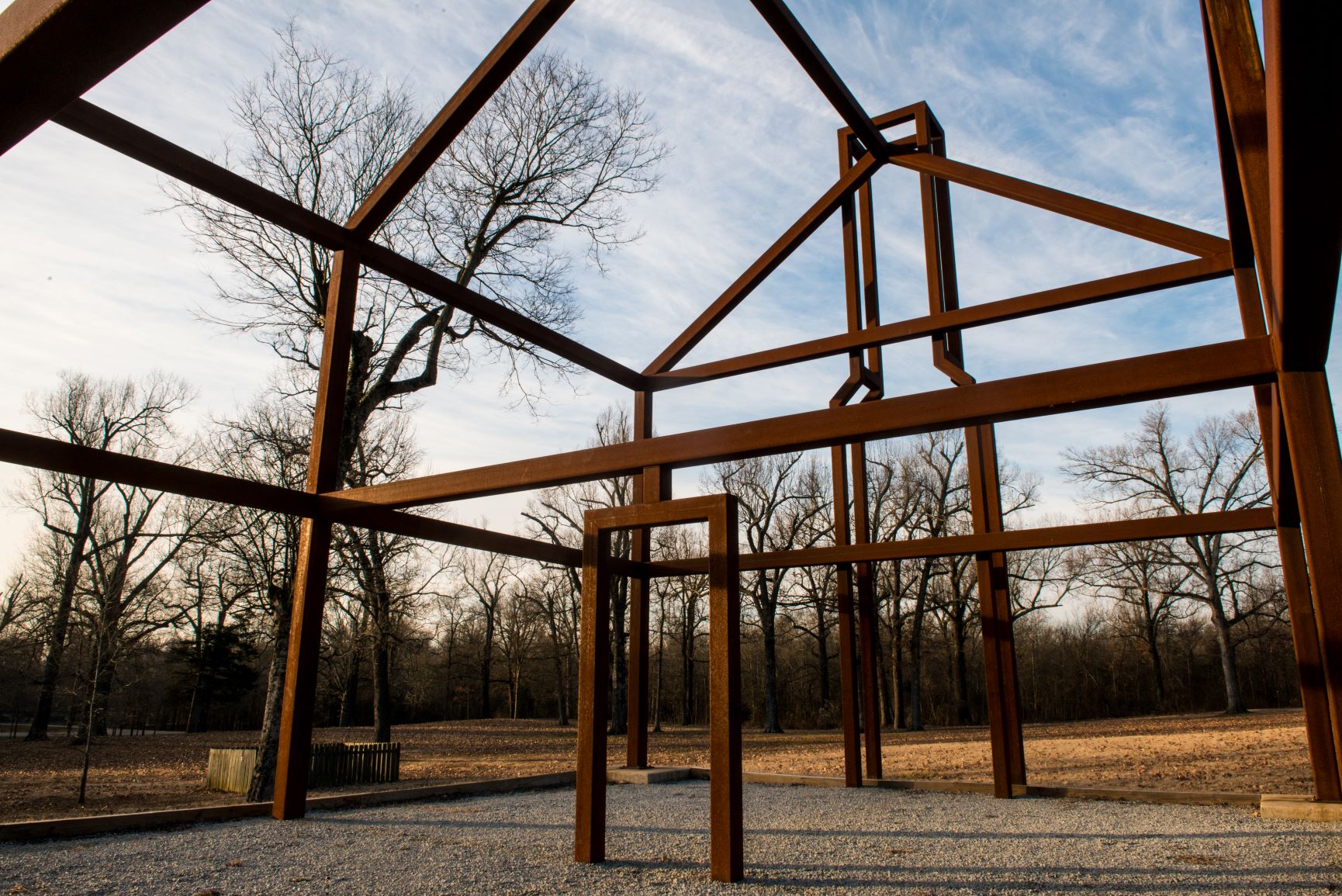 Today, Davidsonville looks very different than it did in the early 1800s, no longer a bustling community and center for legal and commercial business, but instead a place to discover how Arkansas began. It is the goal of Davidsonville Historic State Park to preserve the cultural and natural resources found here, as well as interpret how life would have been for the people living in Arkansas’s first platted town. For example, you can now see several steel-framed “ghost structures” on the former townsite, which were designed based on archeological research and serve as outline representations of where buildings like the post office were located.

As you read further in this article, you’ll discover that like modern roads, rivers were a vital source of transportation for the people of Davidsonville and other rural towns.

Roads were often unreliable, but rivers such as the Black River here were a clear preexisting path through the Arkansas wilderness. Since Davidsonville was the first platted town in Arkansas there were not many roads leading to or from the town. In early Lawrence County court record’s, there are many instances of new roads being built, as seen in the excerpt below:

Ordered that William Robinson, Esquire, be appointed to apportion the hands to work on the road from Micajah Harris’ by way of Gray’s ferry to where the road intersects the road leading from Hix’s Ferry to Davidsonville” (Craig, 1990).

Like the town of Davidsonville, the roads that existed 200 years ago looked very different from the roads that exist today. Roads like the one mentioned above would have looked more like modern-day trails where trees and brush had been cleared to make a well-defined—but not necessarily smooth—path through the woods. These roads were often rugged, swampy, not well maintained, and heavily rutted from muddy conditions or flooded from high rivers. Many of the roads also ran across rivers and would include dangerous river crossings.

Since roads were unreliable, many early towns were built with rivers in mind. The town of Davidsonville sat on the west bank of the Black River giving the town access to a vast system of waterways. Even though rivers can be treacherous and unpredictable, they were often quicker, more reliable, and more efficient than roads. Transportation by river also meant you could take a larger amount of supplies and goods with you, as larger and more maneuverable vessels became available. Flatboats, keelboats, canoes, and rafts floated on the Black River commonly carried goods from places such as Pittsburgh, Saint Louis, and New Orleans. 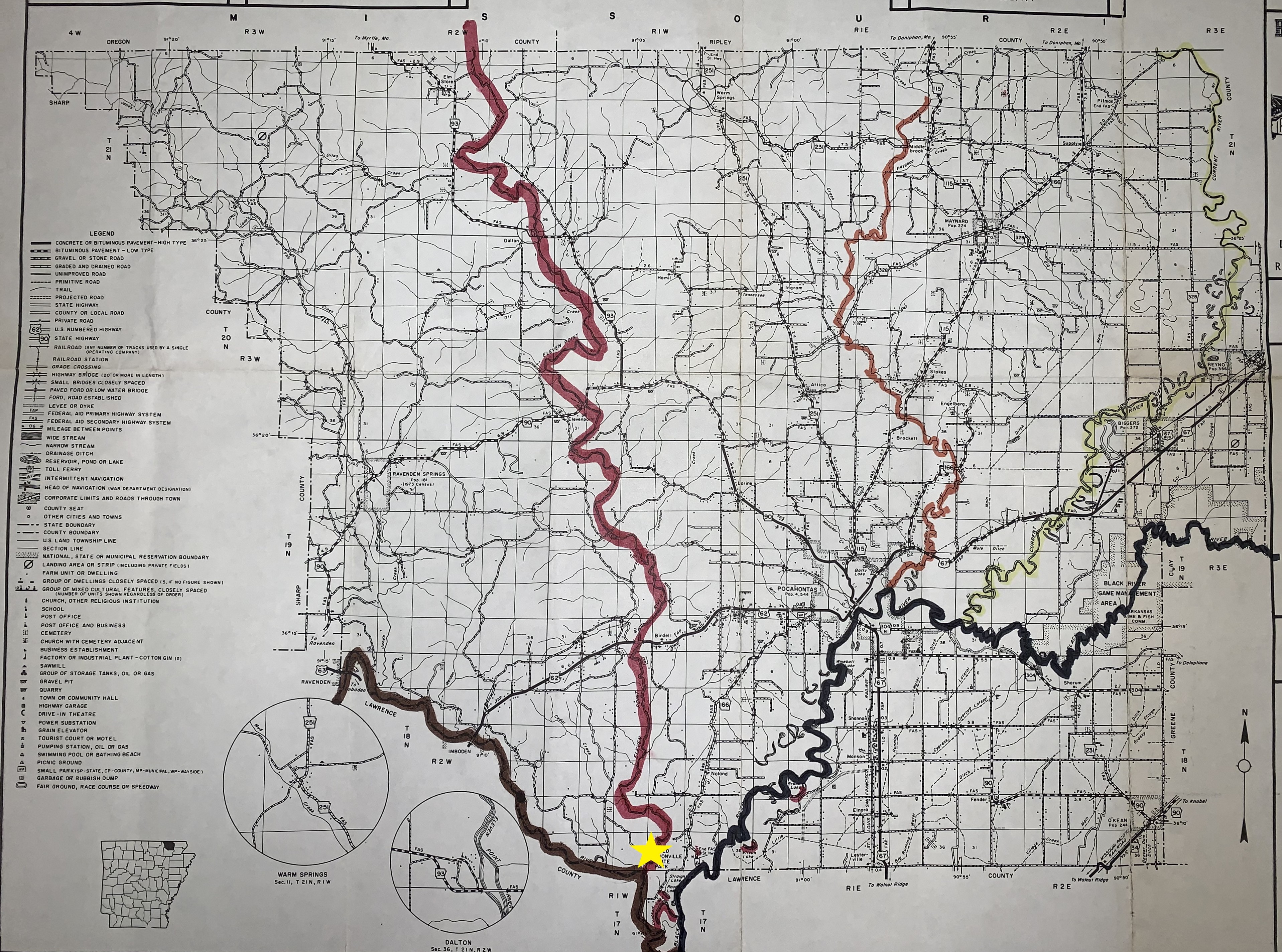 Shown above are the five rivers closest to Davidsonville: The Spring River, Eleven Point River, Black River, Fourche River, and Current River. The star indicates the townsite. Rivers were so vital to the way of life in these towns that instead of platting the town with streets north to south like we do today, founders platted the town to be parallel with the river.

For people looking for better opportunities in larger markets, rivers were a vital source of transportation. Imagine yourself as a young farmer from Missouri, in the year 1819, floating down the Black River on a creaky wooden flatboat made from old timber and logs built solely for this journey. You are on your way to New Orleans to sell your goods at the market. The flatboat you’re on is full of salted pork, corn, flour, and many other goods that are needed further down the river.  It is hot, muggy, and getting dark when you smell coffee, fresh-baked bread, and campfire smoke wafting from a nearby town on the west bank of the Black River. You and your crew use oars to steer your vessel to the bank and use a rope to tie the boat to a tree. You arrive at a town called Davidsonville in the newly formed territory of Arkansas.

Rivers were vital not just for people selling their goods but also for the people in towns who relied on items to come from other areas for daily life. Farmers and merchants would travel for weeks delivering items to towns along the rivers, on their way to bigger markets. Many boats that passed by Davidsonville would be on their way to New Orleans where they could sell the rest of their goods for a better price. 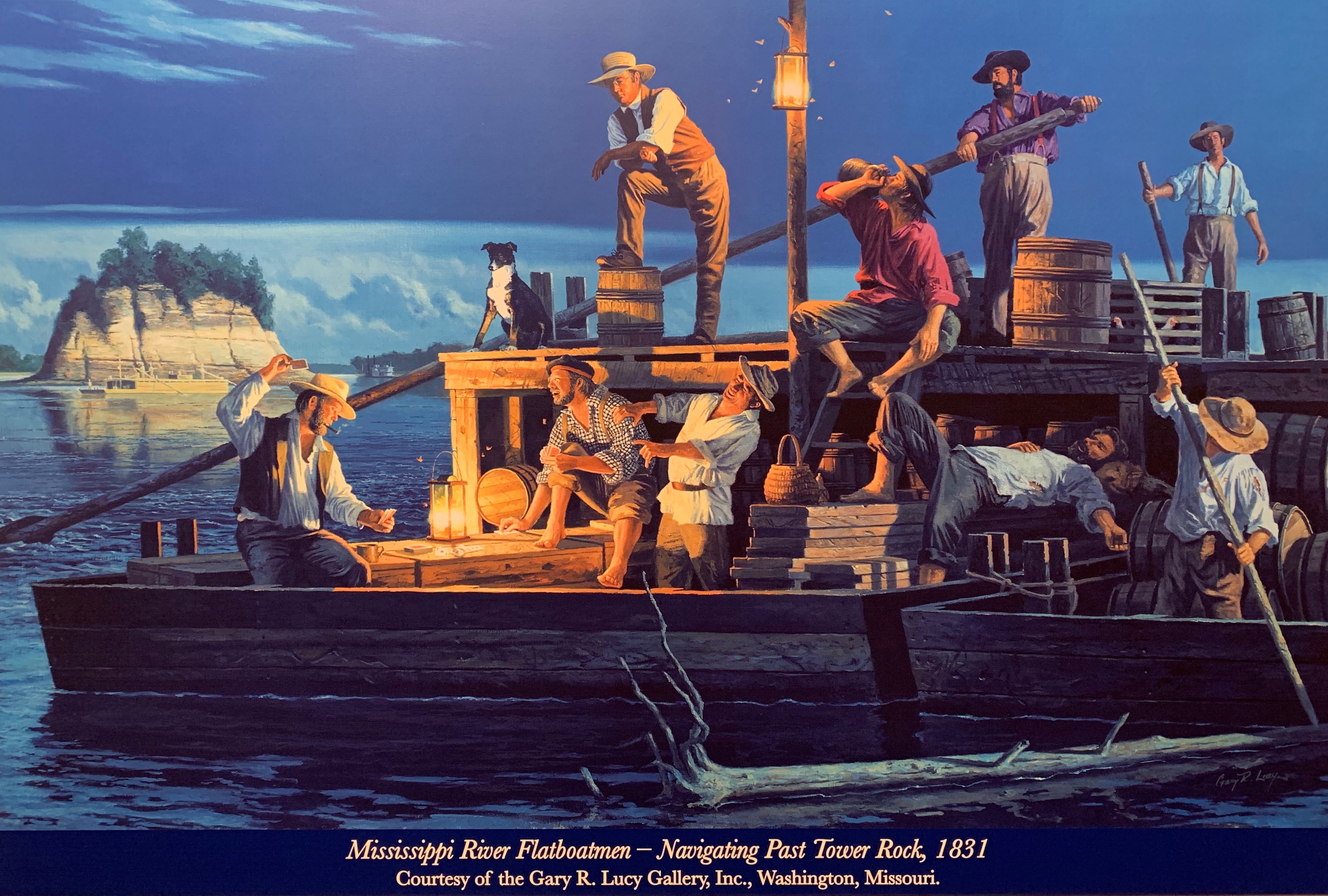 The vessels used for this vital source of transportation catered to the purpose of the journey, much like our vehicles do today. Deciding which vessel to take down the river would have depended on the goal of the journey. Just like today, we would not drive a semi-truck to go to a park, but we would use a semi-truck to deliver large loads to a grocery store. Vessels that were popular at the time were canoes, rafts, flatboats, and keelboats.

Flatboats were one-way vessels, meaning you could get them down the river but not upriver. Flatboats were built out of lumber and had a flat bulky hull. Once at the end of their journey, flatboats would usually be disassembled, and the lumber would be sold or kept intact and repurposed into floating inns and taverns. The merchant or farmer who had come downriver to sell his goods would then either head back on foot or catch a ride back up the river on a keelboat.

These replica flatboats can be found in the visitor center at Davidsonville Historic State Park. Both replicas were made by John Cooper. 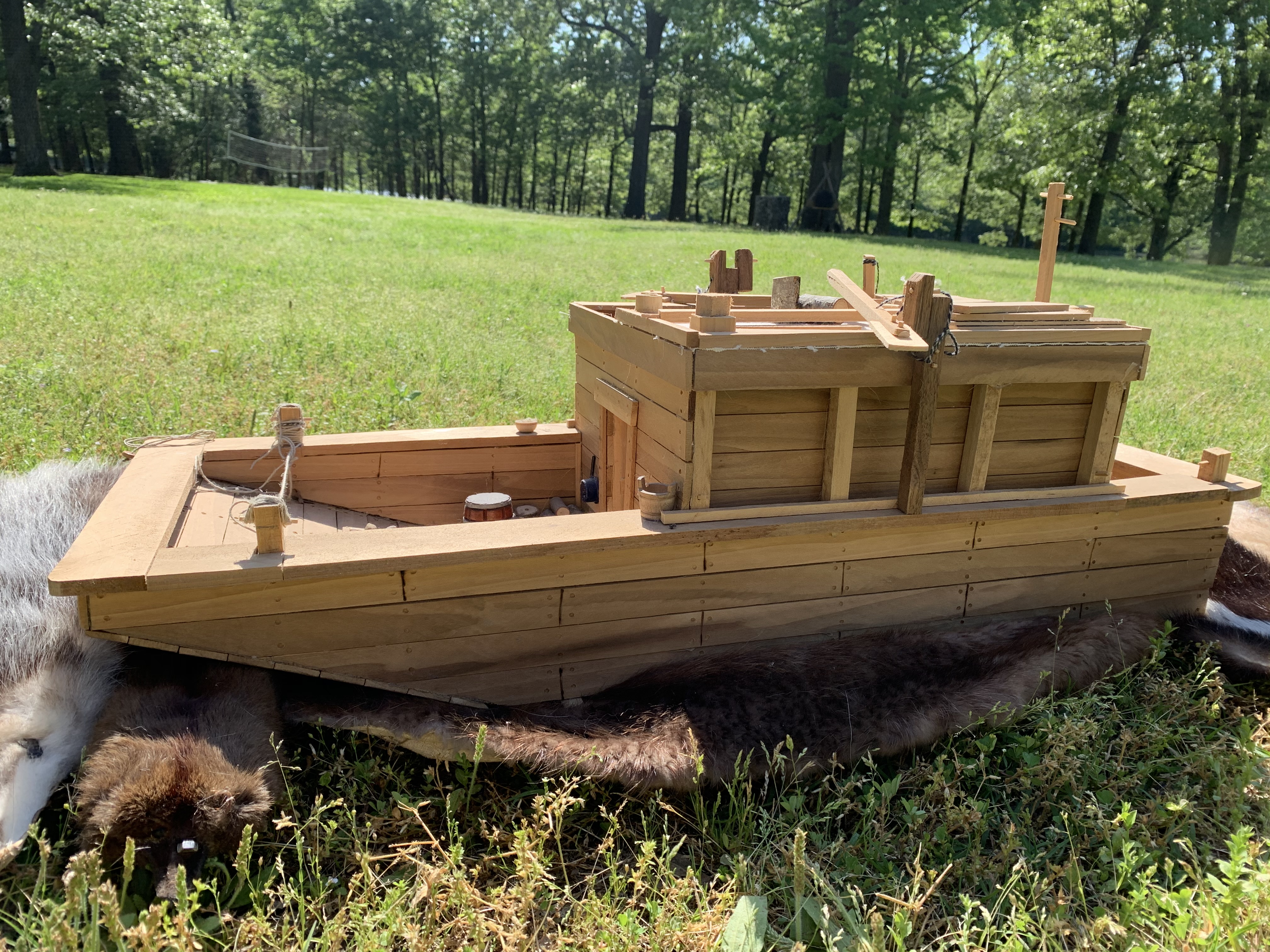 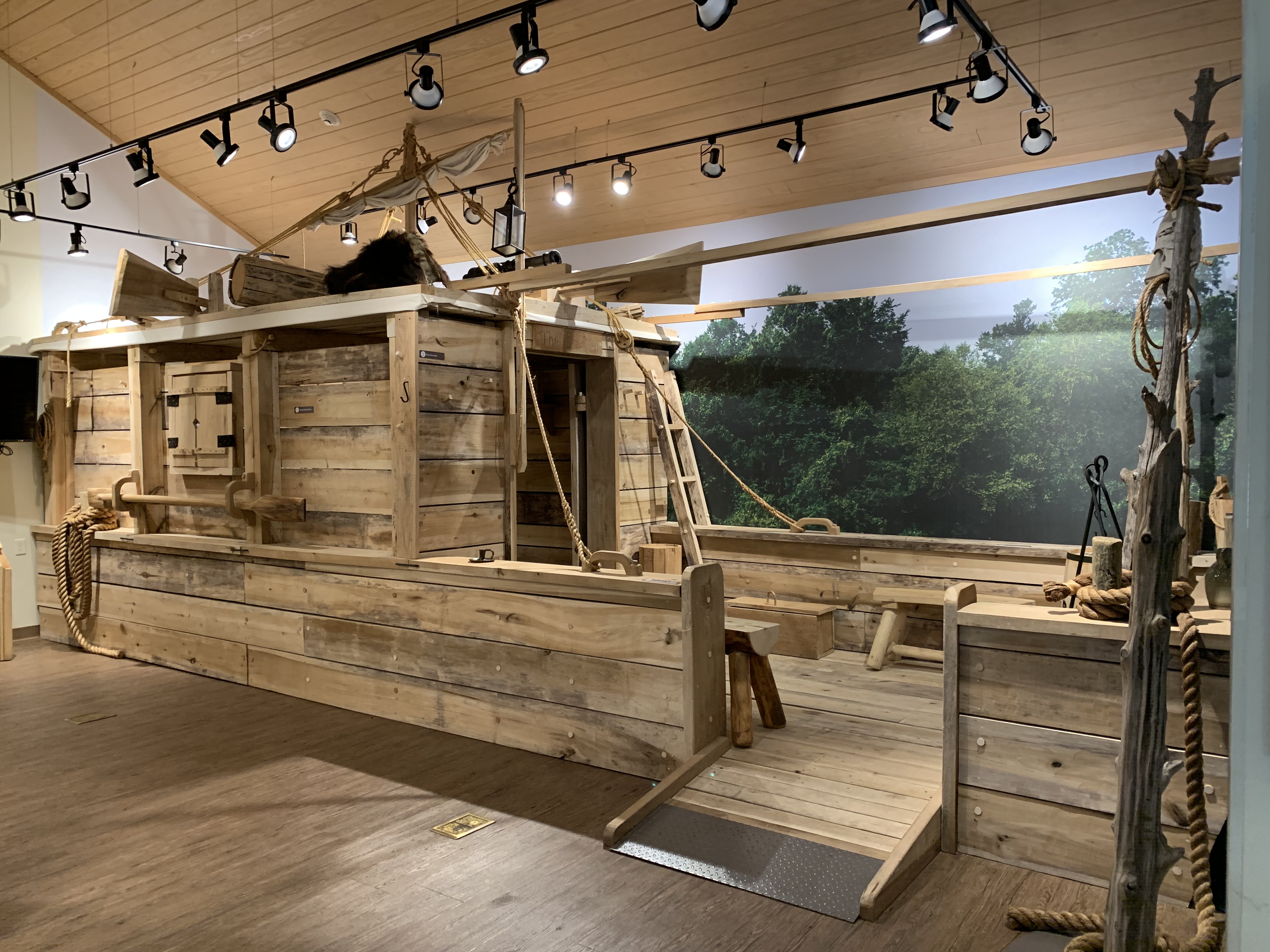 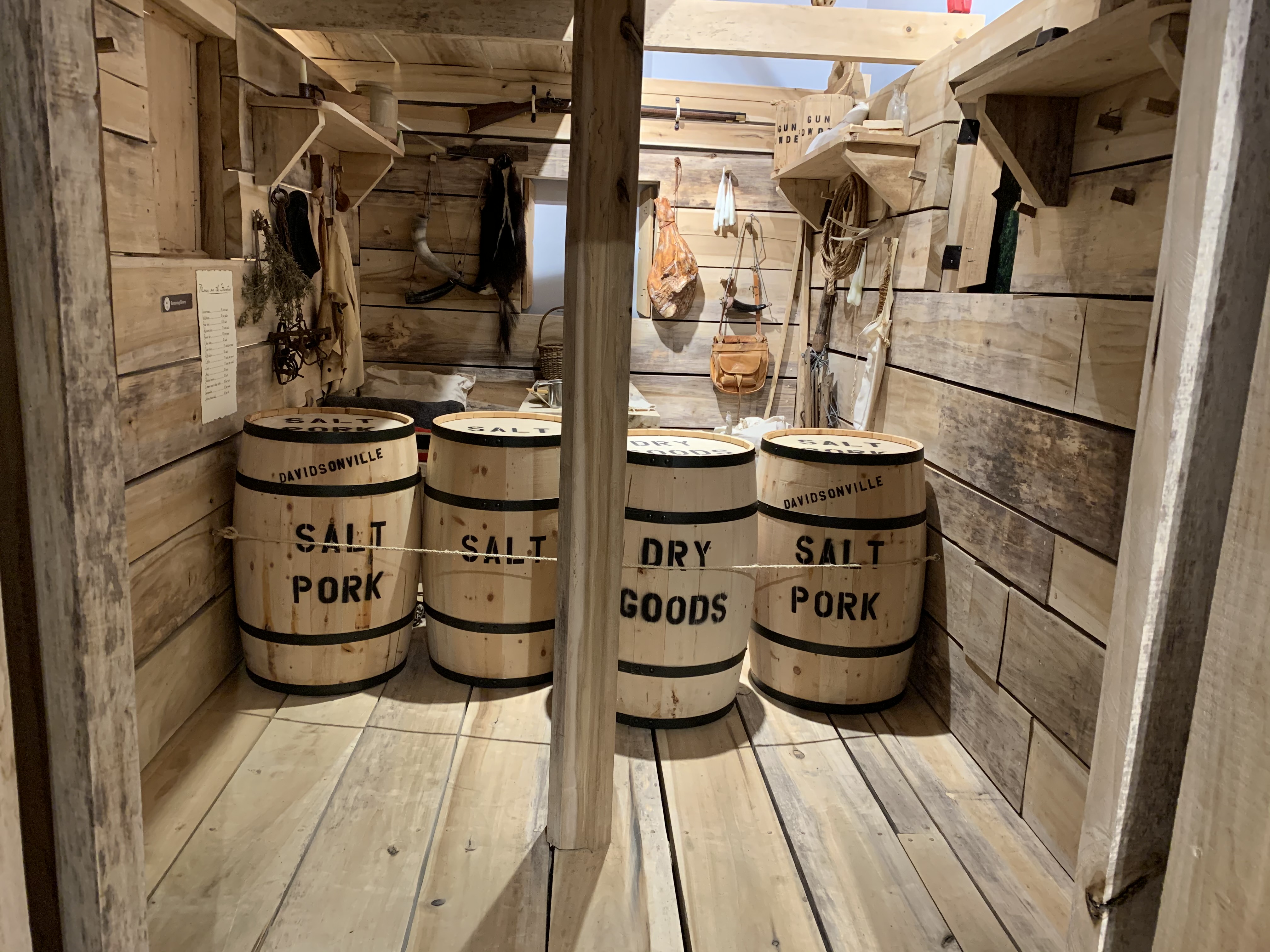 Keelboats, like flatboats, varied in size based on where they were built. Unlike flatboats though, keelboats were designed with v-shaped bottoms, or keels, on the front and back of the boat making them able to navigate moving water both down- and upriver. Even though going upriver was a painstakingly slow process, at least with a keelboat it was possible.

The keelboat replica shown here was created by John Cooper and can be seen in the visitor center at Davidsonville Historic State Park. 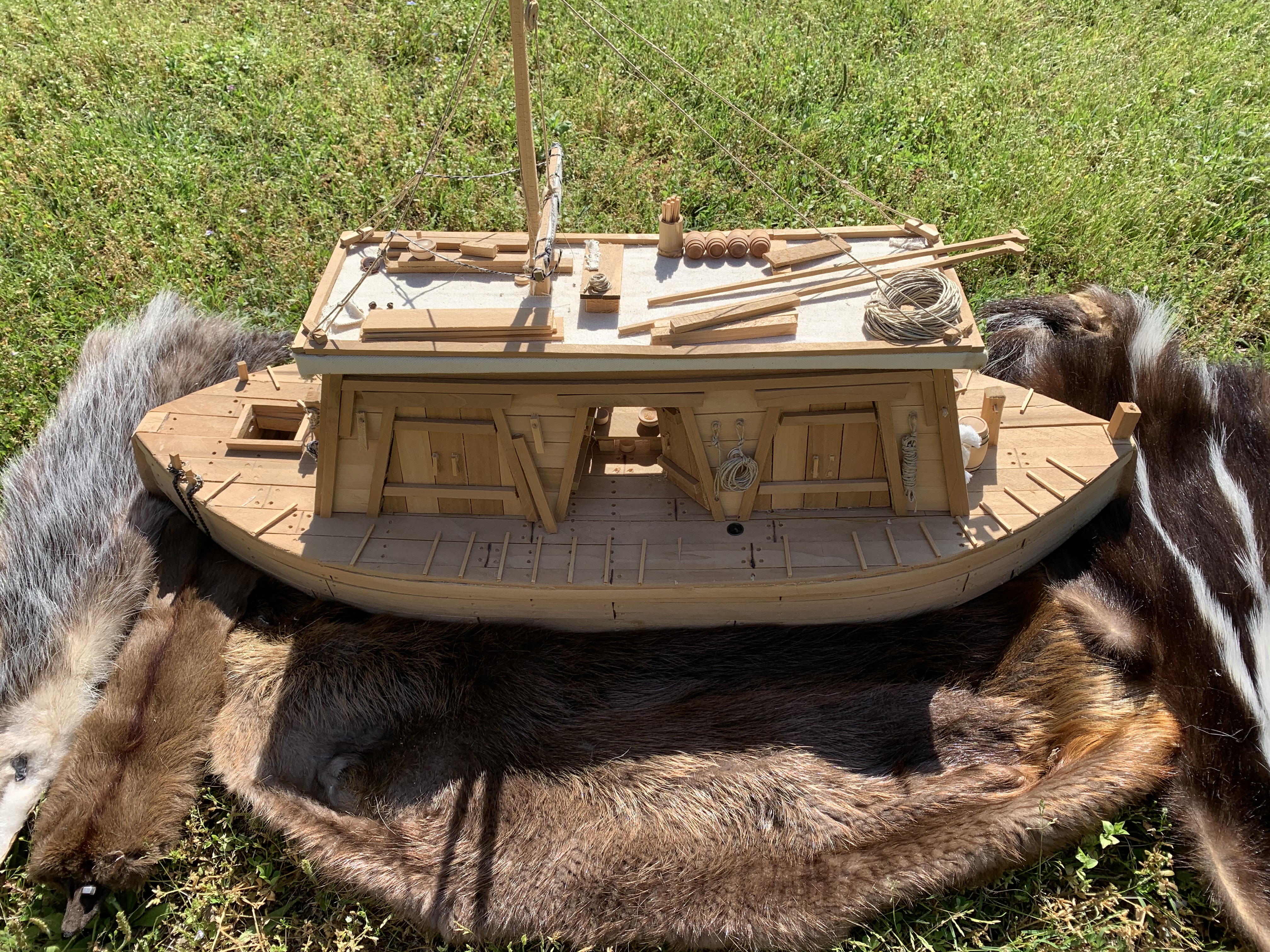 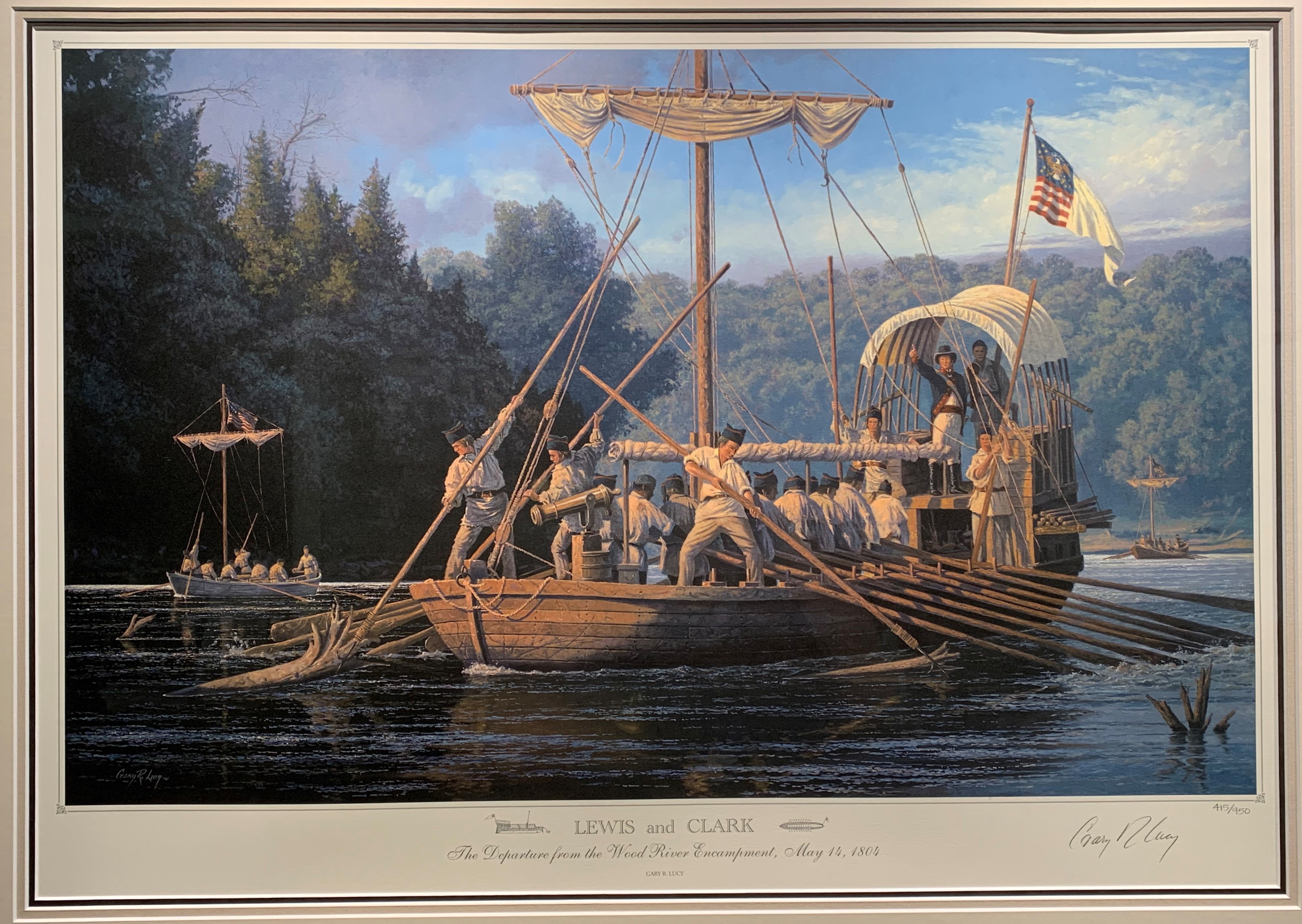 Pictured above is an example of a keelboat. Notice how there are a sail and more men on board than in the flatboat painting. Along with the curved front of the boat and an occasional pulley system, these are all things that helped keelboats to go upstream where flatboats could not. Picture courtesy of Gary R. Lucy Gallery, Inc., Washington, Missouri.

No matter what vessel or reason for traveling, rivers were a vital resource for daily life for the people of Davidsonville and other newly formed towns of Arkansas Territory in the early 1800s. It is how they received the goods that they needed for daily life as well as earned a living selling items further away. Rivers provided opportunities for exploration into new territories and allowed people to travel further--not very different from the way we use roads today. Even though our means of transportation has drastically changed, our need for transportation has not.

We encourage you to make a visit to Davidsonville Historic State Park in Pocahontas, Arkansas, to climb aboard the flatboat replica, take a walk to the Black River, and experience what life was like in Arkansas’s first platted town. Sarah Reap has been a park interpreter with Arkansas State Parks since May 2019. She is currently the Park Interpreter at Crater of Diamonds State Park where she has worked since September 2022. In her pass time she loves to go hiking with her dog and paddle boarding with her friends. Check Out These 4 Monument Trails in Arkansas