A National Historic Landmark, the Plum Bayou Mounds site comprises one of the largest and most impressive archeological sites in the Lower Mississippi River Valley. Preserved here are Arkansas’s tallest American Indian mounds. Three mounds remain where 18 once stood surrounded by a 100-foot earthen embankment, a portion of which is still visible today at Plum Bayou Mounds Archeological State Park in Scott, Arkansas. These ancient earthworks are the remains of the late-Woodland thru early-Mississippian Period ceremonial and governmental complex which was inhabited here from A.D. 650 to 1050. This place isn’t short on interesting topics and things to do, but we thought we would highlight five fun facts about Plum Bayou Mounds and park interpreter Amy Griffin shows you a few in this video.

Way before there were jon-boats for fishing at your favorite fishing hole, there were dugout canoes. Although we have never found a dugout canoe at Plum Bayou because of its organic material, it is believed they used them to get food from the lakes and rivers, travel, and also as an avenue of trade. The title “dugout canoe” is appropriate. A log was cut from a tree, laid down, and fires were built on top, and then the embers were dug out. There have only been a few of these old canoes found in Arkansas and one such canoe is displayed in Plum Bayou Mounds Archeological State Park’s visitor center. We offer park interpreter-led kayak tours or visitors can rent kayaks, to tour the mounds from a different perspective, possibly as the Plum Bayou people did.

Mound A is currently the tallest Native American mound in Arkansas at about 48 feet tall. In other words, it is as almost as tall as a five-story building. To build this massive mound in prehistoric Arkansas, the two most important tools were a digging stick, which was burnt on the end, and a basket for hauling the dirt. Since tall, flat-topped mounds have been identified as platform mounds, we believe it could have been an area used to hold a hut to live in and/or conducting ceremonies. 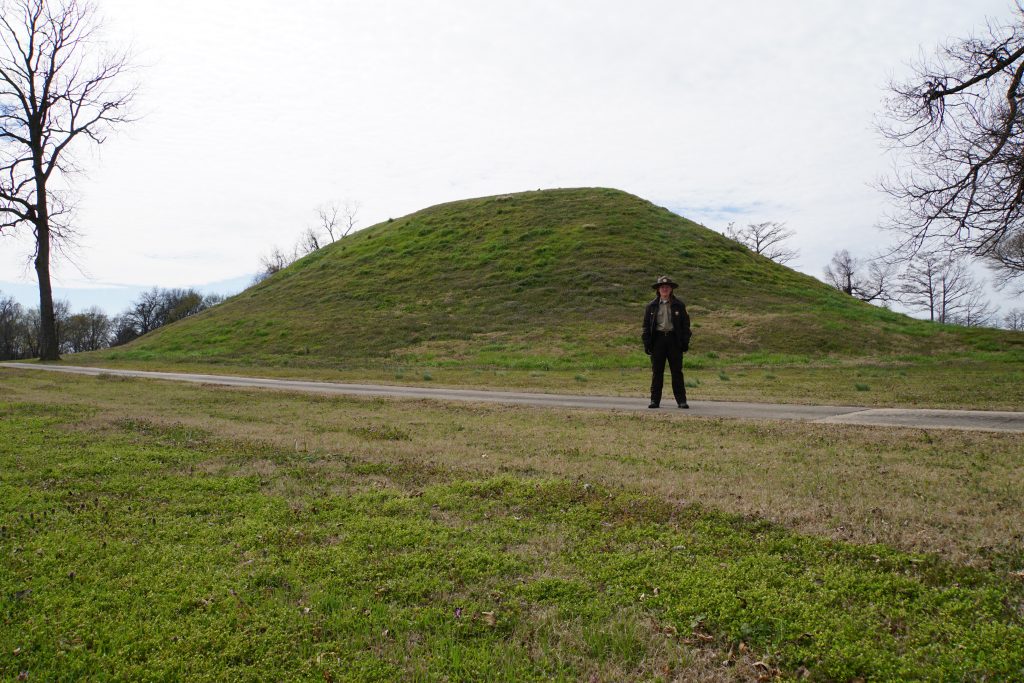 Out of Arkansas’s 52 state parks, Plum Bayou Mounds Archeological State Park is only of three Native American parks. The other two are Parkin Archeological State Park and Hampson Archeological Museum State Park. It is also only one of two state parks that partner with the Arkansas Archeological Survey in which the labs are managed with full-time archeologists. Parkin is the other. Unlike Indiana Jones, the state archeologists unearth artifacts both young and old that tell us about the people who lived here. Their job tasks include anything from site surveys, artifact identification, mapping, botanical research and much more. One of the most important archeological evidences they find is not in the soil but the soil itself. The type of soil, its density, and color sometimes tell more of a tale than artifacts. One example of importance is that archeologists are able to see where structures once stood because of the way wooden posts decompose and leave different color circles of soil.

Most people think archeologists only find information from arrowheads, pottery, and other stone tools at Native American sites. However, there are unexpected artifacts that are found here that tell us even more about who lived here. Quartz crystal is no stranger to Arkansas in that we find a lot of it here but we find it in the western side of the state. Here at the mound site, we find quartz pieces, as well as crystal arrowheads that are on display in the museum. It must have been an important piece for them to take the time to travel the distance to get this quartz, and then shape points out of this really hard mineral. Other interesting archeological finds are bits of copper from the Great Lakes Region and conch shell from the Gulf of Mexico. This tells us that the Plum Bayou people must have been trading or traveling great distances. Visitors can also view each of these artifacts in the park museum.

There are cultures and places we learn about in school that include the Egyptians, Mayans, and Stonehenge that all went to great feats to build complex structures that told them the time of the year. Right here in Arkansas, we have the same occurrence. Here at Plum Bayou Mounds Archeological State Park, the Plum Bayou people not only built 18 mounds but also placed some of them in exact spots to tell what time of the year it was. It is believed they constructed this calendar here at their ceremonial spot to tell them when to plant and harvest their crops. If anyone has stayed in Arkansas at any length of time, they know that the weather is less than predictable at times. It may be as warm as 70 degrees in February, so having plants growing and then harvested at the correct time could be crucial to survival. And having enough food for everyone at the end of a growing season is cause to have a celebration.

We hope you’ll come visit us and discover everything Plum Bayou Mounds Archeological State Park has to offer with each visit. Check out our blog about an issue we have at Plum Bayou that became a family affair.