You better watch out. You better not cry. Better not pout, I'm telling you why: The Holiday Light Extravaganza is in town! The Arkansas Museum of Natural Resources’ Oil Field Park comes to life with a variety of sparkling vignettes to delight the young and young at heart. 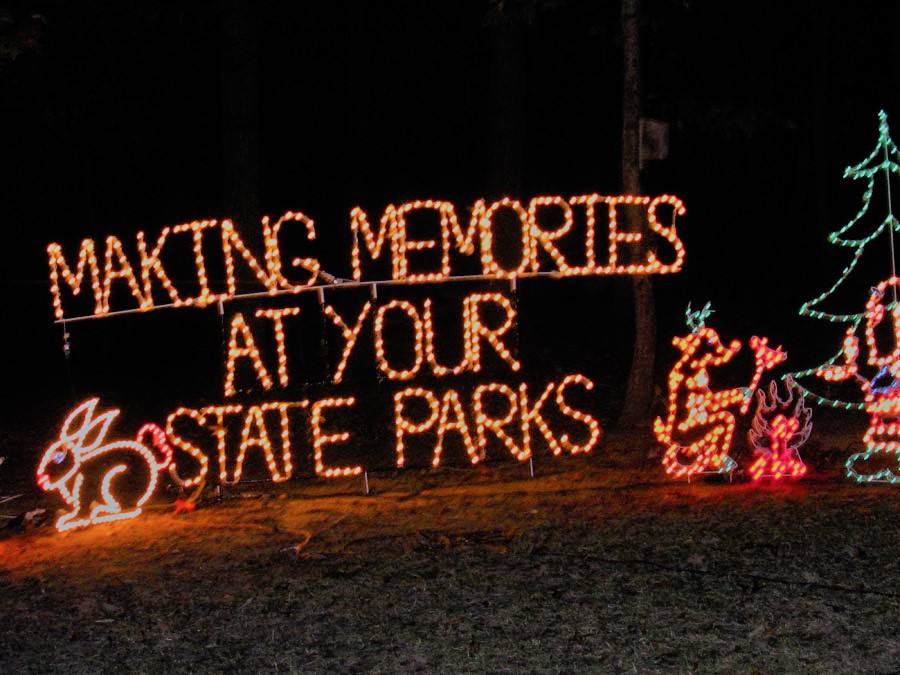 “This is the 11th year for the event and the enthusiasm grows each year,” said Superintendent Pam Beasley. The lighting extravaganza is open for guests each Friday and Saturday night through December 21, from 5:30-8:30 p.m. except for December 7.  This is an easy walking tour about a quarter-mile long. A special show will be featured this year called Holiday Hoopla on December 7, featuring a live penguin from the Little Rock Zoo. The museum will also close at 4:45 p.m. on that date to prepare for the festivities of the Hoopla!

This is the 2nd Annual Holiday Hoopla event that has been in the works for a year. There will be so much to do during the Hoopla that it will be difficult to decide what to do first. Will it be to see the penguin from the Little Rock Zoo or visit with Santa and Mrs. Claus working in their workshop? You have to decide! The penguin and Santa will be there on Saturday the 7th. There will also be other winter characters on-site such as Elsa, polar bear and reindeer, and elves galore! There will also be arts and crafts available for the making. In addition to photo opportunities, kids and adults alike can enjoy lots of fun activities including an Elfie Station, roast marshmallows, enjoy cocoa and much more! Kids will have a chance to write their letter to Santa that he will read when he returns home.

Cost for the Holiday Hoopla is $20 per car up to seven people, each person over that is $5. The hours for the event are 5:30 p.m. to 8:30 p.m. The last entry to see the penguin is at 7 p.m., so don’t get your tinsel in a tangle if you don’t get to see them because they have to get back to Little Rock for their bedtime. The major sponsor for Holiday Hoopla is Cross Oil Refining and Marketing and Martin Operating Partnership. Beasley stated, “Without their sponsorship, the penguin would be impossible, so a big thank you goes out to them and their commitment to the Arkansas Museum of Natural Resources and south Arkansas.”

Walk through the beautifully lit oil field park to see the sights of the holiday season. See a gingerbread land, a hatching baby dinosaur, and a flying pig. Santa’s Rock Band is truly whimsical, and the dancing snowman is a delight to watch. Santa’s Rock Band consists of Santa on guitar, Eddie the Elf on drums and Rudolph crooning all of the holiday favorites.  Snow E. Mann will be “cutting a rug.”  The pair might even remind you of Bing Crosby and Gene Kelly.  The forest with 24 sparking trees “dance” to holiday music in a wonderful light show. New vignettes have been added and the number of lights has grown to over 201,500 throughout the park. The Holiday Light Extravaganza started to pay homage to an event that took place in Smackover in 1935. That year Smackover had a Christmas decoration contest and a 13-year-old boy named Eddie Rouse won with his simple cross of two boards nailed together, painted white and wired with lights. Eddie won the contest every year until judges put it into its own category. A star athlete, Eddie went on to play football at Mississippi State College; things looked bright for Eddie Rouse. That was until America went to war and so did Eddie. While Eddie was off to war his mother, Katherine Rouse, continued the tradition of putting out “Eddie’s Cross” for the Christmas season. Attached to General Patton’s Third Army as a paratrooper, Eddie was killed by a sniper’s bullet on 10 December 1944.

Eddie’s story was published in the Smackover Journal during the month of December for many years. Written by Don Lambert, former Director of the Arkansas Museum of Natural Resources, the story of Eddie’s Cross would touch the heart of readers and give them time to reflect the true meaning of the season through the story of a boy and his cross. According to Pam Beasley, “I love the story of Eddie’s Cross! It shows the innocence of a boy who paid the ultimate sacrifice for his country. There’s something magical about viewing the lights with your family, just as it was in 1935. We are so pleased to bring this memory-making event to Union County.”

Admission to the AMNR Holiday Light Extravaganza is $10 per car, with passenger vans being $20 for the Holiday Hoopla cost is $20 per car and passenger vans are $35. After a romp through the park, visitors are invited to warm up in the museum gift shop with a cup of steaming hot chocolate. You'll also have the opportunity to browse through the shop, in search of those last-minute, unique gift items.

Also, during the festive season, join the museum interpreter, Charles Licciardi, for two free programs on December 14 related to ornaments and toys of the past. At 1 p.m. make ornaments from the past and at 2 p.m. learn about toys through the years and then make your own to take home. Call the museum for additional information and to reserve your spot 870-725-2877.