FAYETTEVILLE, Ark. – The Razorbacks are headed to Central Arkansas April 6-7, 2018, for a weekend of festivities surrounding the 2018 Red-White Spring Football Game. Arkansas head football coach Chad Morris and the Razorback football team will take part in a fan interactive event at Dickey-Stephens Park, in North Little Rock, on Friday night before taking the field on Saturday for its spring game at War Memorial Stadium in Little Rock.

“We are looking forward to an exciting weekend in Central Arkansas as we introduce fans to Coach Chad Morris and our new staff while also providing fans their first look at the 2018 Razorback Football team,” Hunter Yurachek, Arkansas Vice Chancellor and Director of Athletics, said. “We appreciate the cooperation of our friends at War Memorial Stadium and the Arkansas Travelers for partnering with us to make this weekend possible. I hope fans throughout the state will join us and take advantage of this opportunity to meet our team and cheer them on during the spring game.”

“What a fun weekend this is shaping up to be,” Kane Webb, executive director of the Arkansas Department of Parks and Tourism, which manages War Memorial Stadium, said. “We’re thrilled to be able to play a part with the spring game at the stadium and look forward to the game, all the fun festivities surrounding it, and just having the Razorbacks here in Central Arkansas.”

In advance of the 2018 Red-White Spring Football Game, Arkansas fans will have the opportunity to meet the Razorbacks on Friday, April 6, at the Arkansas Travelers baseball game at Dickey-Stephens Park in North Little Rock.

The Razorbacks will sign autographs when the doors open at 6:10 p.m. through the end of the third inning in the right field area of the stadium behind the bullpen, and Coach Chad Morris is set to throw out the first pitch before the Travelers face the San Antonio Missions at 7:10 p.m. CT.

Members of the Razorback Marching Band and Spirit Squads will also be in attendance interacting with fans. The first 5,000 fans in attendance will receive a 2018 Razorback Football poster upon entry into the stadium.

The Travelers will also host a fireworks show following the conclusion of the game. Tickets for the Travelers-Missions game will go on sale Monday, March 5, at 10 a.m. CT at Travs.com/tickets.

“The Arkansas Travelers are excited and honored to partner with the University to host Coach Chad Morris and his 2018 Razorbacks Football team,” Paul Allen, General Manager of the Arkansas Travelers, said. “It will be an exciting night here at Dickey-Stephens Park filled with baseball, autographs and a superb post game fireworks display.”

On Saturday, April 7, the Razorbacks will play the 2018 Red-White Spring Football Game at War Memorial Stadium in Little Rock. The day begins with Spring Game Fan Fest from 9 a.m. – 12:30 p.m. in Parking Lot 5, east of War Memorial Stadium. The free event will feature inflatables, a visit from Tusk, music and more.

The game will kick off at 1 p.m., and admission will be free and open to the public.  The Travelers play later that night at Dickey-Stephens Park with first pitch at 6:10pm, see www.travs.com for more information. 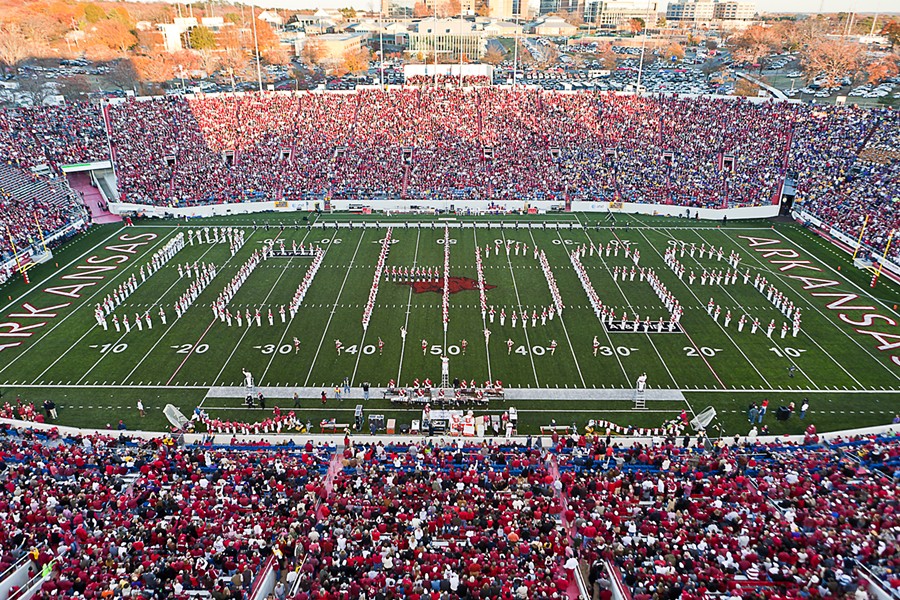